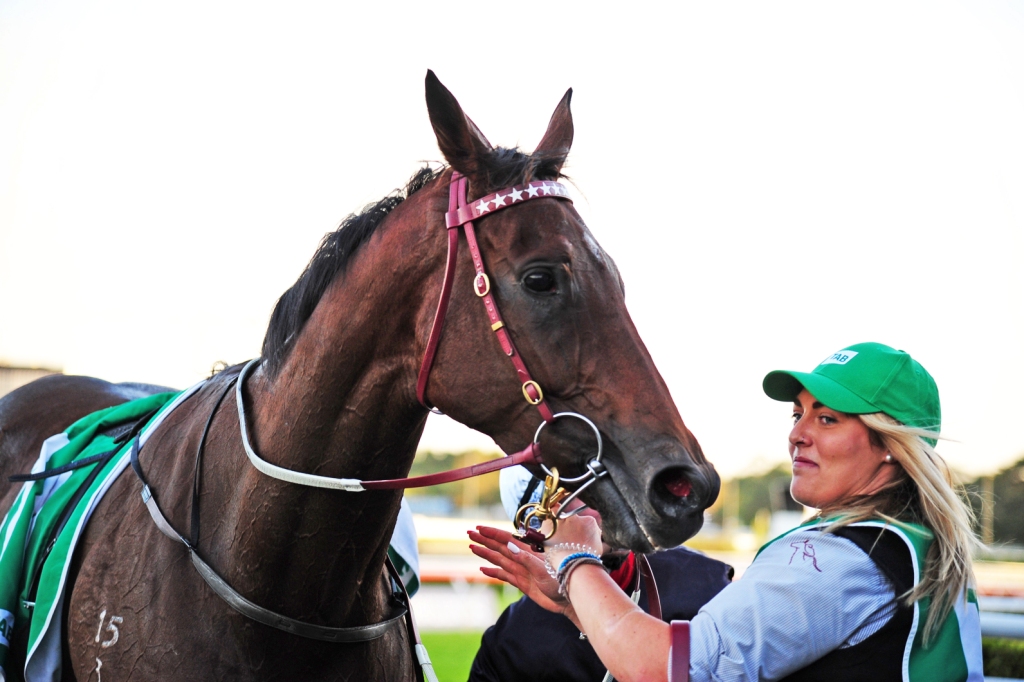 Quilista after her Sapphire Stakes win at Randwick (Lisa Grimm)

West Australian trainer, Justin Warwick, was as surprised as anyone when the bidding stalled and then stopped at $10,000 for the Scandal Keeper filly from Brocky’s Ace at the 2015 Perth Magic Millions Yearling Sale.

Warwick “loved the filly” and was always going to take her home but had thought he would at least have to stretch the budget out to $20,000 or $30,000 to win the day.

However, while she might have stopped short in the ring, the filly-now-mare – Quilista – never showed one sign of stalling in Saturday’s Group Two TAB Sapphire Stakes over 1200m at Royal Randwick.

Jumping from a wide gate, Quilista forged straight to the lead and never looked like relinquishing it, racing away to score with close to two lengths to spare.

It was the third win in a row for Quilista following victories down the straight at Flemington in March and the Group Three Birthday Card Quality in Sydney.

Warwick, who originally trained trotters, shifted to the world of thoroughbreds some seven years ago and looks after a small team at Myalup, some 150 kilometres south of Perth.

The trainer has compiled a tidy record however, winning the Group Two Perth Cup with Black Tycoon (2014) and Material Man (2018) and a host of other black type races in the past five years.

Quilista made an inauspicious start to her career in April 2016, running 8th of 12 at Ascot, then ran a third and second in town but, as a 3YO, peeled off four straight, which included a black type victory – the Rangeview Stakes – and another stakes third in April last year.

However, Warwick then made the momentous decision to shift his horse to another trainer – specifically Darren Weir in Victoria.

“There were lots of reasons,” Warwick points out. “Firstly, Ascot is our main track over here and, while Quilista, has won at Ascot, she always seemed to be getting on the wrong leg. I thought down the straight at Flemington would be ideal for her.

“There’s also limited opportunities in Perth for horses like Quilista when they get to a certain standard.

“I definitely thought she was worth sending across too because I had another very good horse called Wink And A Nod (seven-time stakes winner in Perth) who ran Black Heart Bart to a lip second in a Group race and I believed Quilista to be a better horse than Wink And A Nod.

“Yet another factor was that Darren had trained a couple of my other horses, including Black Tycoon, and while he didn’t have much luck with them, he’s the type of bloke that will listen to you … take note of a horse’s quirks or requirements.

“The plan is to eventually sell Quilista when her racing days are over, so the more black-type she can build up, the better.”

Quilista appears likely to be given the opportunity to add to the dowry by heading to Adelaide for the Group One UBET Classic (Robert Sangster Stakes) on 5 May and/or the Group One Goodwood Handicap a fortnight later.

Quilista’s sire, Scandal Keeper – a 2YO winning son of Danzig – stood at Yarradale Stud in WA, but died last year after covering 386 mares across 10 seasons.

Scandal Keeper has produced 56 winners with Quilista being the clear standout, although five others have been stakes-placed.

Quilista’s Group Two success continues the tremendous run of Western Australian breeder, Ellie Giles. She actually had two that she bred line up at Royal Randwick on Saturday, with the Andrew Noblet trained Silent Sedition chasing a second Group One victory in the Coolmore Legacy Queen of the Turf Stakes.

Unfortunately, Silent Sedition could only manage 10th but won the Group Three Mannerism at Caulfield in February, finished a neck third in the Group One Coolmore Classic on 17 March and has now won $1,177,150 in prizemoney.

Silent Sedition too was sold at the Perth Magic Millions Yearling Sale, a year prior to Quilista, but for slightly more … $45,000 (not that anyone’s complaining!).

The success of Quilista caps off a remarkable 12 months for Giles who is also the breeder of Man Booker, winner of three stakes races on end last year, Profit Street, a stakes winner in Perth last July and Achernar Star, the half-brother to Man Booker, who ran second in the Group Two WA Guineas before a three-quarter length third in the Group One Kingston Town Stakes.

In a rare visit to the east coast, Giles was front and centre at Royal Randwick on Saturday, cheering on Quilista and Silent Sedition.

“I was in the Hunter Valley seeing some of my mares and I decided to extend the trip and go to Randwick … it’s not often you get to see two of your horses go around on such a big day,” Giles explained.

“It was wonderful to see Quilista win the race, especially as she was ridden by Damian Lane, who grew up just a couple of kilometres down the road from me.

“And yes, some people think I’m disappointed for selling Quilista so cheaply, but good luck to Justin. Besides, I picked up a number of breeder bonuses from her wins in Perth and the mare (Brocky’s Ace) is in foal to War Chant, the sire of Silent Sedition, and whatever she ends up producing will be a three-quarter relation.”