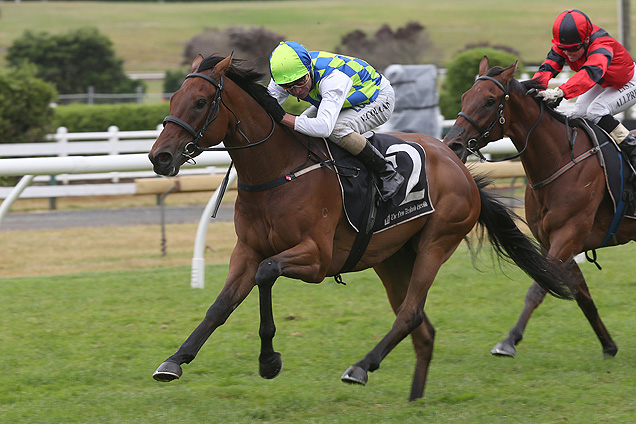 Peter Liston has cheekily pencilled in the attention grabber already.

“I can see the headline: ‘Stryker has Diamond Derby Day’,” Three Bridges Thoroughbreds’ owner and operator joked. “That would be nice.”

It would be somewhat ironic if Stryker, one of two stallions standing at the Victorian stud, can crack his Group 1 duck with not one but two majors on the same day.

The main source of Liston’s optimism is the bizarrely named Classic contender Rangipo, which derives his moniker from a New Zealand prison.

Raced by the New Zealand-based Thompson family, the Australian-bred gelding raced away with the Waikato Guineas at Te Rapa on Saturday to further underline his New Zealand Derby credentials later this month.

It will be the same day Stryker filly Miss Nymeria, an eye-catching sixth in the Blue Diamond Preview for the fillies, will hopefully line up in the $1.5 million Blue Diamond, the first two-year-old Group 1 of the season.

“All of the people who have the Strykers say they’ve got a good one at home, but he probably just needs a Group 1 horse to come out,” Liston said. “I think he’s got about 30 per cent winners to runners.

“He only served around 70 mares [last breeding season], but there’s enough out there. He’s getting a lot of winners and a few stakes winners too now.

“Rangipo was born an outstanding type and he’s like a lot of Strykers in that he has an outstanding nature and likes to work with people. They’re very good natured horses.”

Rangipo’s dam is Zabeel mare Holloway, whose first mating with Pierro produced a foal which was born dead but she now has a colt at foot to the Golden Slipper winner.

But an even more important prospect lies ahead at Easter for Three Bridges, who will offer a Frankel filly out of South African Group 1-winning mare Chocolicious in their small draft set for Sydney.

“She will create a lot of attention,” Liston said. “We’ve got a couple in Melbourne and we had a really good sale on the Gold Coast like a lot of people did. [But] this filly looks as though she could be a two-year-old. [Frankel] was a superstar and I think this will be a good sale for her.”