Triple Crown In The Pink As They Reel In Danish 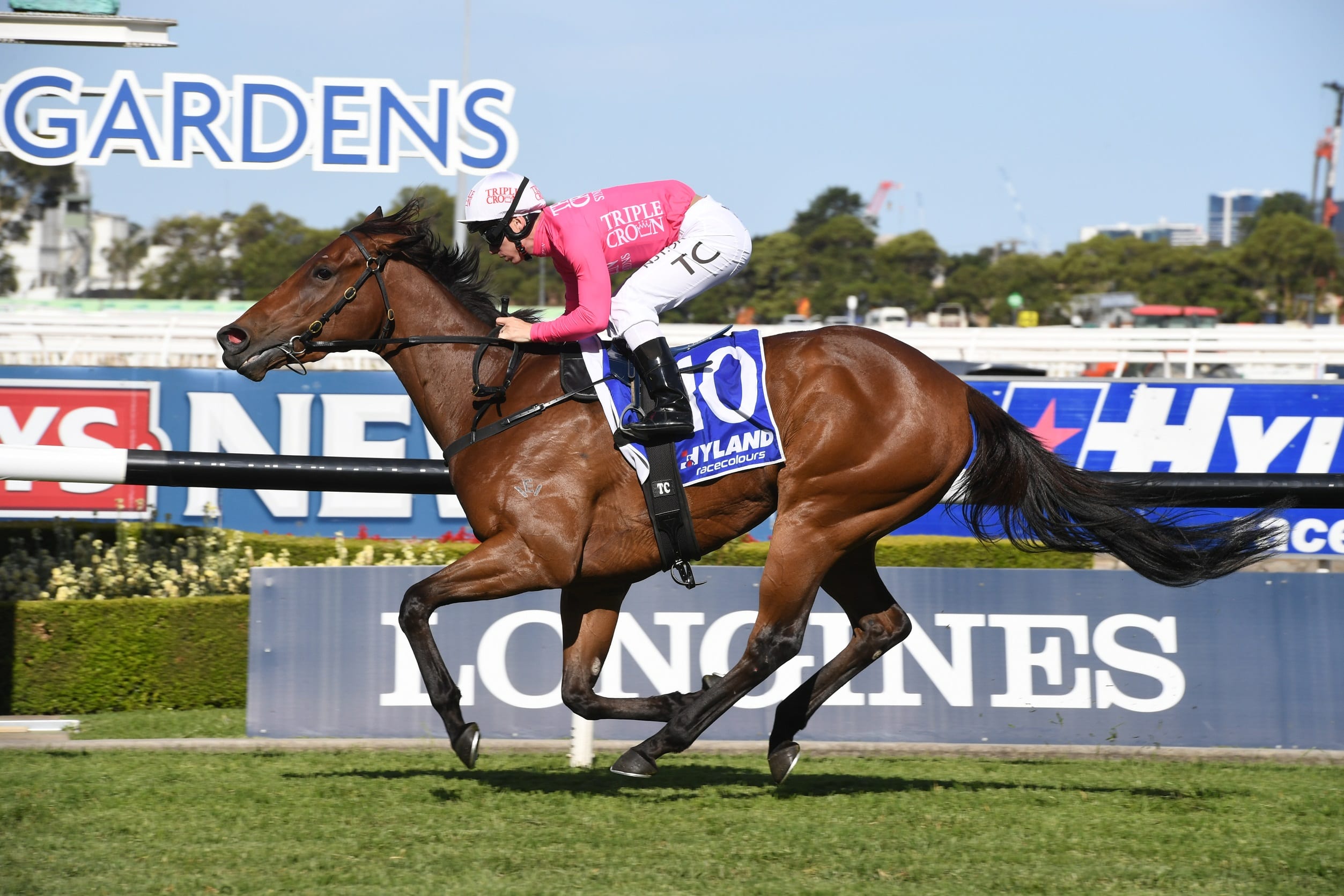 No need to adjust your TV.

The bright red silks of Triple Crown Syndications have become a familiar sight on Australian racetracks, particularly through the likes of $16 million earner, Redzel.

However, pink has become the new red – at least for the month of November – as Triple Crown mares, Reelem In Ruby and Moss Trip, ran 1-2 in Saturday’s Group Two Hyland Race Colours (fitting!) Hot Danish Stakes over 1400m at Rosehill Gardens.

Triple Crown is aiming to boost breast cancer awareness by raising funds for the McGrath Foundation and has set up a GoFundMe page (https://bit.ly/2K4vxi0) along with a decision to race all its horses in pink throughout November.

Indeed, Triple Crown’s Military Zone chimed in with $10,000 courtesy of the inaugural Golden Eagle on 2 November where all runners in the $7.5 million race had 10% of the prizemoney donated to a nominated charity.

And, if the pink silks caught the eye in the Hot Danish on Saturday, Reelem In Ruby’s run certainly created awareness of just how good this mare is and, hopefully, will become.

It really was an explosive performance from the Pierro 4YO who has not once been out of the top three in her 10 starts to date (four victories), but the Hot Danish was her first win at black type. It’s unlikely to be her last.

“My brother Michael and I were big fans of Pierro as a racehorse and were pretty confident he would make it as a stallion,” Triple Crown’s Chris Ward recalls. “It’s unquestionably turned out that way and he’s become very versatile with Derby and Oaks winners and great sprinters as well.

“When we saw Reelem In Ruby in the Mayfield Thoroughbreds draft at the sales (2018 Inglis Melbourne Premier Yearling Sale) we thought she was a magnificent, athletic type and considered her a bargain when knocked down to us for $90,000. She had previously been sold for $75,000 as a weanling.”

(Triple Crown purchased Redzel for $120,000 at the 2014 Gold Coast Magic Millions Yearling Sale after he had earlier been offered at weanling sales).

“Reelem In Ruby took a while to fully mature – in fact, I reckon she still has some more growing to do – but hasn’t really missed a beat. Great thrill for her owners. She’s likely to be sent out for a break now but will return in the autumn with races like the (Group One) Coolmore Classic in mind.”

Red and/or pink silks aside, Triple Crown has quite the renown too for the celebrations of owners after a big win and Reelem In Ruby’s connections didn’t let the side down at Rosehill by making their presence well and truly felt in the mounting yard.

“There’s a good mix of owners in Reelem In Ruby,” Ward reveals. “Quite a few existing clients, but also a few young blokes that are in their first horse. They were pretty excited on Saturday as you can imagine.

“Ryan and Matt Hezlett have watched their father John enjoy success with other Triple Crown horses like Military Zone, Dothraki, Charlie Boy, Denpurr and Emperor’s Way and decided it was their turn to join him in one which turned out to be Reelem In Ruby. They were also joined by their cousin, Ben Moon (whose father Trevor is also in Emperor’s Way), so their family gatherings are pretty exciting affairs! Clearly the next generation is coming through and they’ve got bragging rights as well.”

Not just bragging rights. Following the Hot Danish victory, it’s estimated that Reelem In Ruby’s residual value as a broodmare would be in the range of $750,000 and that would multiply considerably if she adds a Group One to the mix.

Top ride from @clarkyhk on Reelem in Ruby to win the Hot Danish.

Not surprisingly, Erinvale Thoroughbreds’ John and Crystle Kenneally have been keeping a close eye on the rise and rise of Reelem In Ruby, having bred the now 4YO Pierro mare and selling her for $75,000 at the 2016 Inglis Sydney Weanling Sale.

“She (Reelem In Ruby) looks to be very smart and congratulations to all her owners,” John Kenneally points out. “That was an outstanding win on Saturday in the Hot Danish and her second in the (Group Three) Nivison a couple of weeks back was excellent too.

“Reelem In Ruby wasn’t overly big and, as she’s from Pierro’s second crop, he didn’t have runners at that stage. However, there was a lot of quality about her and it’s hardly a shock that she’s doing so well.”

One of the Victoria’s most successful vendors over the past two decades with yearling graduates including last year’s Group One Levin Classic winner, Age of Fire, the family-run Erinvale has primarily focused on the weanling market over the past five years.

“We still consign yearlings on behalf of clients, but we’ve largely moved into selling weanlings from our own stock because, frankly, the foal market is fantastic,” Kenneally enthused. “This year we were the leading vendor by average on the Gold Coast (National Weanling Sale) and sold an American Pharoah for $250,000 and a Zoustar for similar money.

“There’s definitely a strong market out there for youngsters by fashionable – ‘sexy’ – sires with a good (catalogue) page.

“We purchased, in partnership, eight mares in foal to top sires this year and the resultant progeny will all go through the weanling sales.

“After winning her Group Two, Reelem In Ruby is the best performed weanling we’ve sold to date, but Erinvale also prepped Rio Del Mar for the Sydney weanling sale in 2017 and he won a Group race in Perth earlier this year.”

Reelem In Ruby’s dam, the Giant’s Causeway mare, Bobine, was purchased by Kenneally for USD$20,000 at the 2011 Keeneland November Breeding Sale and is a half sister to Champion USA Filly, Possibly Perfect, in turn the dam of Group winner and sire, Promontory Gold.

Since arriving in Australia, Bobine has produced just three live foals: Reelem In Ruby, multiple South African winner Flexible Fugitive and a Pierro 2YO full brother to Reelem In Ruby, who was knocked down to James Harron for $115,000 at last year’s Gold Coast National Weanling Sale.

Unfortunately, Bobine has failed to produce a foal for the last two seasons.

“It’s frustrating! Bobine doesn’t have a problem getting in foal, but maintaining the pregnancy is the issue,” Kenneally explains. “I’ve sent her up to (leading reproductive vet) Angus McKinnon and she was covered eight days ago by So You Think. Fingers crossed!

“I definitely don’t regret buying the mare though. I went to Keeneland that year and the dollar was just about on parity with the US, while the market over there was going through a bit of a slump at the time.

“Reelem In Ruby’s owners have done really well … she’s now a Group Two winner by Pierro with a brilliant North American pedigree. Best of both worlds!”

HOOFNOTE: Tim Clark, who rode Reelem In Ruby on Saturday, steered Hot Danish for the majority of her illustrious career which included 13 stakes victories, among them the Group One All Aged Stakes and Group One Doomben 10,000.

It’s a @TripleCrownSynd & @SnowdenRacing1 quinella of Inglis grads in G2 Hot Danish Stakes @atc_races as REELEM IN RUBY (Pierro) beats Moss Trip. Winner is a $90k buy for @TripleCrownSynd from Mayfield Thoroughbreds at #InglisPremier. Was also an #InglisWeanling for @Erinvale1 pic.twitter.com/Uetpr3J9mZ