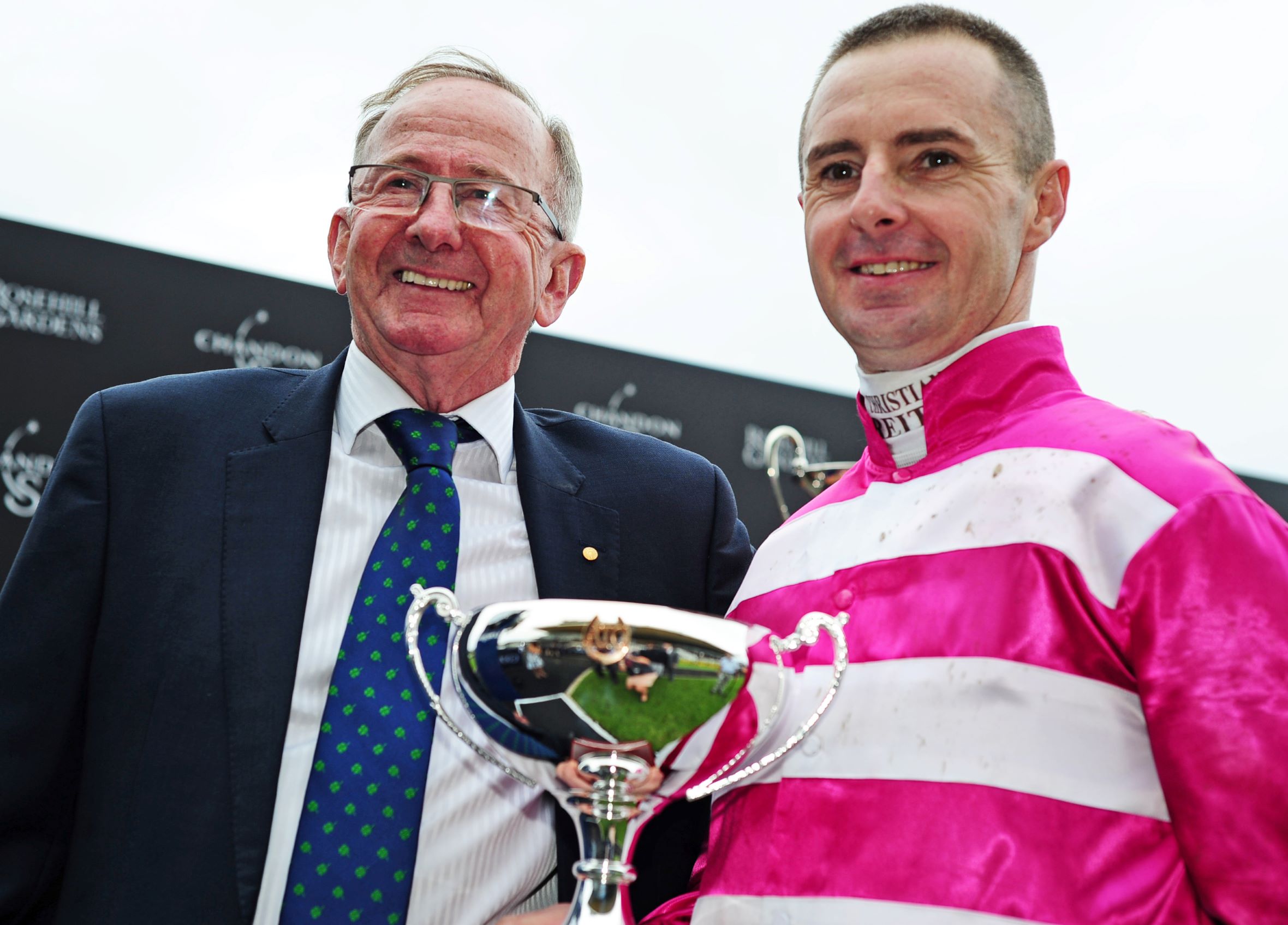 Ron Quinton is one of the most popular figures in Sydney racing … make that Australian racing.

A Hall of Fame jockey who won eight Sydney premierships from the saddle, he steered some of the nation’s greatest horses in the second half of the 20th century.

Then, from the early 1990s, Quinton took up training at Randwick where he has since produced a steady stream of winners, despite comparatively small numbers.

However, while Quinton is reluctant to isolate a favourite moment as a jockey – c’mon, how do you pick between four Golden Slippers, a Cox Plate on Kingston Town, 19 wins on Emancipation or even an Irish St Leger – he admits to being pretty chuffed with training Dixie Blossoms to victory in Saturday’s Group One Coolmore Classic over 1500m at Rosehill Gardens.

“I was just so proud of that mare on Saturday,” Quinton enthused. “She has been knocking on the door for so long: two (Group Two) Guy Walters, two (Group Three) Angsts, a third and a fourth in the (Group One) Myer Classic, a third (beaten a length) in the Group One Queen of the Turf.

“Group One success is really what you aim for when you have a good filly or mare. Dixie Blossoms is definitely going off to stud this year and we really were starting to run out of time.”

Having launched his training career with the likes of 7-time stakes winner, Mamzelle Pedrille, and following up with Group One success via Easy Rocking and Bulla Borghese, Quinton has made the Coolmore Classic his own, saddling up four winners in the race – Dixie Blossoms, Daysee Doom (2018), Peeping (2016) and Ofcourseican (2012) – and piloting two others: the legendary Emancipation in 1984 and Miss Personality – the race’s inaugural winner – in 1973.

“In the early days of training I had about 48 in work – the majority of those for Millie Fox – but I’ve scaled back the numbers these days to about 20,” Quinton explains. “I’m really happy for Alan Osburg who races Dixie Blossoms and also bred the mare. She was the first horse I’ve trained for Alan and winning that Group One gives him lots of options.”

Too many it seems!

“I’m changing my mind every 30 minutes … even more so after Saturday,” Osburg says with laugh when asked about potential mates for Dixie Blossoms this spring.

“The Coolmore really does change my thinking a bit and there’s a couple of stallions which they’ve recently announced will head to stud in 2019, but it’s not like I have to make a decision right away.

“I’ll discuss it with Ron, but Dixie Blossoms is likely to have at least one more run which could be in the (Group Two) Emancipation Stakes in a fortnight, the ($3 million Group One) Doncaster Mile a week later, or – most likely at this stage – the ($1 million Group One) Coolmore Legacy on 13 April.

“The funny thing is, I went close to retiring her last spring. She didn’t seem right – looked ordinary in the coat and just didn’t seem like herself.

“She almost got cut in half when resuming last spring in the (Group Two) Tramway and finished third (beaten a long neck) behind Comin’ Through … I was tempted to pull the pin and send her to stud. However, a few people suggested I keep her in training and she came back this time looking much more like her old self. She certainly showed that on Saturday.”

A lawyer by trade, Osburg races a handful himself and bred Dixie Blossoms from his winning Star Way mare, Whistle Dixie, a close relation to Champion Miler, Zonda.

Involved in racing for over 30 years, Osburg had earlier paid the feed bills for Champion Sprinter, Exceed And Excel, who won a Newmarket and the (now) Sir Rupert Clarke Stakes in track record time, before heading off to Darley Stud where he has produced 156 stakes winners.

“In fact, I’ve got one in at the Inglis Australian Easter Yearling Sale in April out of the Street Cry mare, Looking For Love.

“I was actually at Darley when I saw Dixie Blossoms’ sire, Street Sense, for the first time and thought was a beautiful type he was. He’s by Winx’s sire, Street Cry and that’s when I decided to send Whistle Dixie to him.

“Funny thing is, Dixie Blossoms’ year older full sister wasn’t worth a stamp and, initially, there wasn’t much to Dixie either. She was a bit small and the pedigree wasn’t too fashionable at the time. I usually keep and race the ones I believe won’t sell and Dixie fell into that basket.

“Whistle Dixie was a real favourite of mine – you get attached to them – but unfortunately Dixie Blossoms was her last foal.

“Good one to go out on though!”