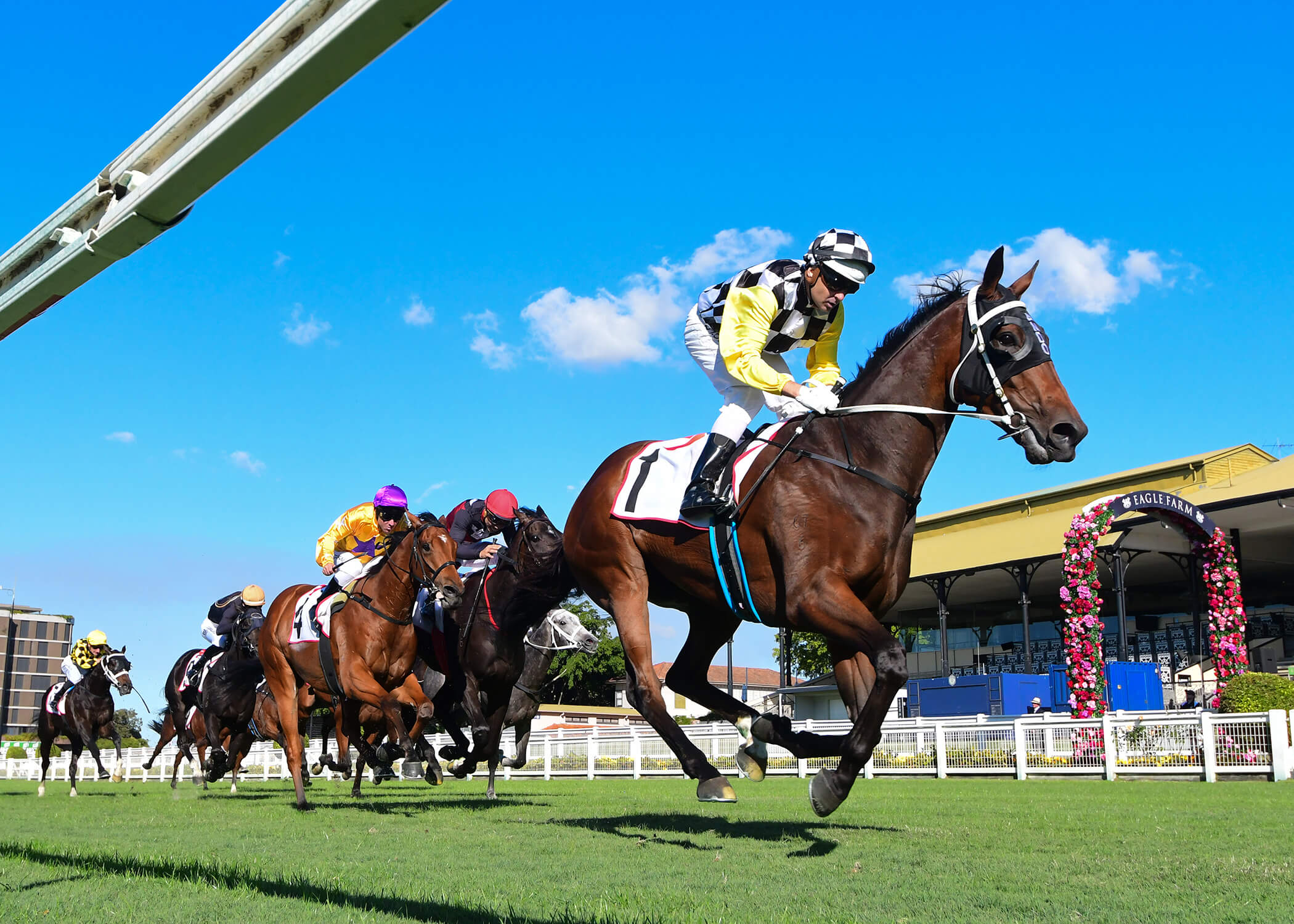 You learn something new every day. Take Ballistic Boy for instance.

All bar the latter raced in Dato Tan Chin Nam’s distinctive black and white checks with yellow sleeves, with the checks being a nod to the owner’s life-long passion for chess … who at one stage sat on the board (no pun intended) of the International Chess Federation and sponsored many famous chess players and tournaments.

However, we digress. Racing in Saturday’s Group Three 7 Racing Rough Habit Plate over 2200m at Eagle Farm, the exciting 3YO, Ballistic Boy, would turn the tables on Supergiant and a classy field of rivals to notch up his first stakes victory, courtesy of a power packed performance.

It was the Smart Missile gelding’s fourth win from 15 starts – along with five placings – for $330,850 in stakes, but Ballistic Boy had been putting the writing on the wall with a third behind Vanna Girl in the Listed Daybreak Lover at Doomben in early May, before a lip second to Supergiant in the Group Three Gunsynd two weeks ago.

And, as leading bloodstock agent, Duncan Ramage, happily points out, it was the second Rough Habit in a row for Think Big and co. after Purple Sector checkmated the 2019 chapter.

Ramage – who operates under the DGR Thoroughbred Services banner – has been purchasing yearlings on behalf of Dato Tan Chin Nam and his family since the early 1990s, with the first buy being a nifty Tate Gallery 2YO – Capablanca – who won his first three starts in Sydney before shifting to Hong Kong (and yes, the horse was named after chess prodigy, Jose Raul Capablanca).

A major player in Australian racing and breeding for decades, Dato Tan Chin Nam passed away in October 2018 and Ramage – who manages Think Big Stud Pty Ltd on behalf of Dato Tan Chin Nam’s children – explains that the operation has scaled back over the last few years.

“Think Big Stud at Burradoo (in NSW’s southern tablelands) was leased to Greg and Jo Griffin’s Lime Country Thoroughbreds in early 2017 and Think Big’s breeding operation has been reduced considerably,” Ramage reveals. “There was a lot of history among those mares including Norzita (a dual Group One winner) who was sold for $1.7 million at last year’s Inglis Chairman’s Sale.

“Think Big had originally purchased the old ‘Inverness’ property and then, after Viewed won his Melbourne Cup (2008), we bought the place next door … and then the property next door to that when So You Think won his first Cox Plate (2009).

“However, while the breeding numbers have dropped, the Dato Tan Chin Nam family is eager to see the colours continue to fly and we currently have around 40 on the books – yearlings and racehorses – and purchase around 10 yearlings annually.

“Whereas Dato Tan Chin Nam raced mostly under his own banner with old friends, the last few years has seen quite a few new friends and clients join in the ownership, as is the case with Ballistic Boy.”

Ramage purchased Ballistic Boy – in conjunction with Eagle Farm trainer, Chris Anderson – for $100,000 at the 2018 Gold Coast Magic Millions Yearling Sale after the then colt had been pinhooked for $14,000 by Dengari Lodge at the 2017 Inglis Scone Weanling Sale.

“Congratulations to Chris as Ballistic Boy is his first stakes winner, but not through wont of trying,” Ramage adds. “We purchased four yearlings together in 2018 and they include the multiple city winner, Profit, who was second to Alligator Blood in the Group Three Vo Rogue, along with the winner Empire Games.

“Ballistic Boy will get a nice spell now. He’s had eight runs this time in and will be brought back for either the spring or the Magic Millions carnival in January.”

“We’ve been operating for 12 years and only offer around 25 to 30 annually,” Middlebrook Valley Lodge’s Verna Metcalfe explained from the 400 acre property at Scone. “They’re not expensive yearlings either and I’m pretty proud of our strike rate.

“Ballistic Boy wasn’t overly big, but a very nice foal and, as a matter of fact, I suggested to Garry Isaac he should buy him.”

“Denise and I would buy around half a dozen weanlings each year to turn them around as yearlings,” Isaac points out. “I was working at Aquis at the time of the Gold Coast yearling sale and put Ballistic Boy through their draft.

“We have a set process – working in closely with our good mate and vet, Dr Greg Nash – and we’d look at around 600 to 800 weanlings every year, trying to picture what they’ll be like in six to nine months time. Ballistic Boy had plenty of scope about him and absolutely thrived during the yearling prep.

“We got an offer beforehand, but decided to put him through the sale and I’m glad we did as he made quite a bit more money.”

While the Isaacs have the runs on the board with Ballistic Boy and bred a Nicconi filly off a bargain fee, before selling her as a yearling for $200,000 (to DGR and Chris Anderson!), it’s dual Everest winner, Redzel, who takes pride of place at the top of the honour roll.

“It just goes to show that x-rays aren’t the be-all and end-all,” Isaac muses. “Redzel was really a $400,000 yearling, but had a compressed hock which put off some potential buyers from Hong Kong and another leading trainer in Sydney. And they’re just the ones I know of.

“Redzel never had a lame day in his life and what a great racehorse he was.”

Magical Mist was purchased by Aquis Farm and Julian Blaxland’s Blue Sky Bloodstock for $120,000 at the 2017 Gold Coast Magic Millions National Broodmare Sale, where she has subsequently produced a Pride of Dubai filly – Splendiferous – who is trained by Gai Waterhouse and Adrian Bott; a Divine Prophet yearling filly to be retained by Aquis; and a colt by The Mission which is a likely starter at a 2021 yearling sale; while the mare is in foal to The Performer.