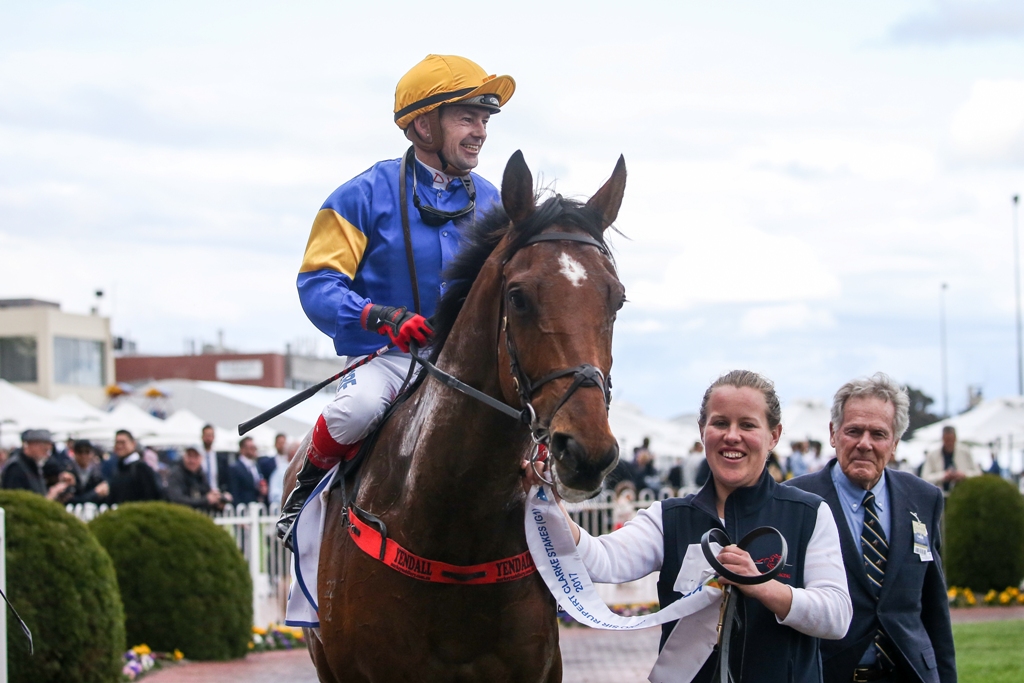 When nifty 5YO, Santa Ana Lane, crossed the line in Sunday’s Group One Keno Sir Rupert Clarke Stakes over 1400m at Caulfield, he had plenty of owners to cheer him on.

Dick Sloane wasn’t among them though. Sloane owns a “very small share” in Santa Ana Lane but didn’t even get to watch the race and only heard about the win via text message.

“I was busy cleaning out my father’s house and lost track of the time,” Sloane reveals. “The next thing I get an SMS saying ‘congratulations’. I also have a share in a horse that was running around at Cootamundra and thought for a moment that’s the one they were referring to.

“You can imagine how pleased I was then when I found out it was Santa Ana Lane. They told me through the week that the horse had a good chance in the Rupert Clarke and turns out they were spot on.”

Santa Ana Lane is the sixth Group One winner (30 stakes winners overall) for former Patinack Farm based stallion, Lope de Vega, and he is out of the well related Fastnet Rock mare, Fast Fleet.

Offered by Rosemont Stud at the 2014 Inglis Melbourne Premier Yearling Sale, Santa Ana Lane was knocked down to Flemington Bloodstock – on behalf of the William Street Syndicate – for $80,000.

With victories in the Group Three Zeditave Stakes and Wagga Town Plate among his five wins and five placings (four at stakes level), Santa Ana Lane has returned his asking price many times over, with the Rupert Clarke taking his tally to $613,700.

Owning a farm at Albury in NSW – “a few cattle, a couple of horses” – Sloane has been involved in the thoroughbred industry for 35 years, both as breeder and owner, but Santa Ana Lane is his first Group One winner.

“I bred from a good old mare called Embers that we had a lot of fun with,” Sloane adds. “She ended up producing six winners including Char (11 wins) and Chinzia (8 wins), but I’ve pretty much scaled back on the breeding side of things and when the opportunity came up to purchase a share in Santa Ana Lane, I thought, why not.

“I reckon syndicates are a great way to go. You’re not going to make a fortune when there are 50 other owners, but that’s not what it’s all about. It’s about having fun. A good time.

“The William Street mob have had quite a bit of success over the years – horses like Gurner’s Lane and Paris Lane – and (Group One Queensland Derby runnerup) Pinstripe Lane was another, so I thought I might as well jump on board when the opportunity arose.

“I got a call on Sunday night though from a friend here in Albury that’s been in quite a few of the William Street horses, and he gave me a real gee up because none of his had been successful … ‘and the first one you go into wins a Group One!’.

“My only regret is that I didn’t back him ($26) and although I didn’t get to watch him ‘live’ you can rest assured I’ve seen the replay a few times.”

The win of Santa Ana Lane was also the first Group One victory under his own banner for Anthony Freedman, having co-trained with brother and Hall of Famer, Lee, for several years before big brother re-located to Singapore recently.

“He was always one of those horses that if he got into one of these races and things went his way, he could definitely win one.

“With Lee going I lost a few horses and I accept that, so results like this put your name back out there.”

Freedman was non-committal as to Santa Ana Lane’s immediate future, but would consider the Group One Toorak Handicap over 1600m at Caulfield on 14 October.

“I don’t know if he’s a genuine miler, but we’ll give him a quiet week and see how he comes back.”

Rest assured, if Santa Ana Lane lines up in the Toorak, Sloane won’t be finding out the result via text!