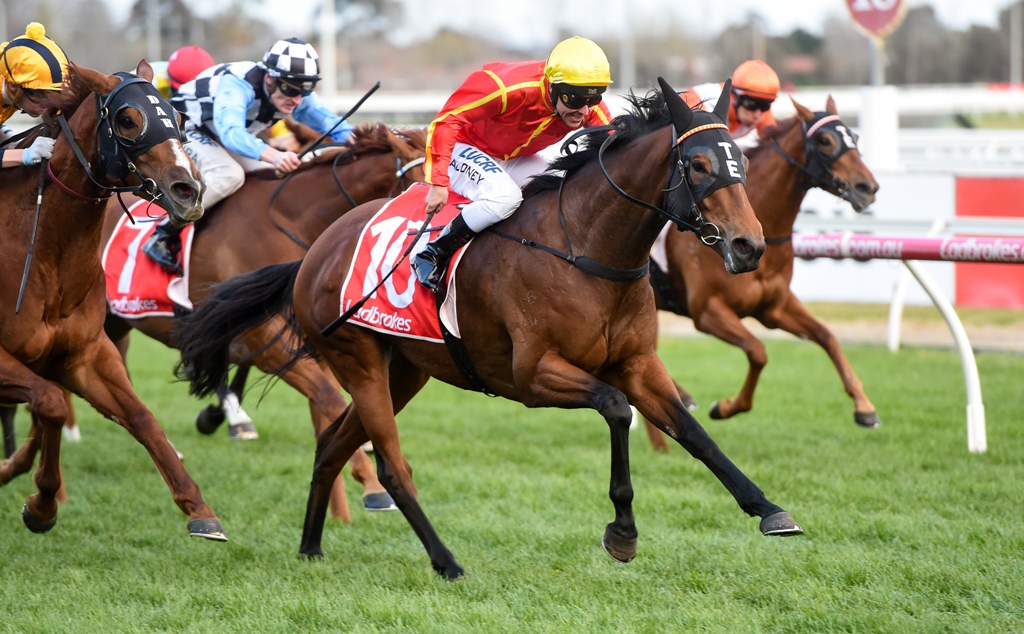 It was something of a red (and yellow seams) letter day for Segenhoe Thoroughbreds on Saturday with a black type double courtesy of Miss Admiration and Winter Bride.

Naturally, it was cause for much celebration at Team Segenhoe and the feat sits nicely alongside the first black type deuce in 2013, according to Racing Manager, Bill Mitchell.

“Kevin Maloney’s Segenhoe operation commenced in earnest around six years ago and it was in September 2013 that we managed to notch up a stakes double with Bound For Earth in the (Group Two) Furious Stakes and Aussies Love Sport, who won the (Group Three) Ming Dynasty,” Mitchell points out.

“It’s great to get any kind of winner but a double is pretty special, particularly as both Miss Admiration and Winter Bride have so much going for them.”

The 48th stakes winner for Widden Stud based, Sebring, Miss Admiration was only notching up her second win in the JRA Trophy from 16 starts, but had previously been third behind Unforgotten in the Group One ATC Oaks in April and a half length away when third to Sopressa in the Group One Schweppes Oaks in May.

Miss Admiration is the third foal (and third winner) for the multiple Group placed, Admiring, a Street Cry half sister to dual stakes winner Empire Dancer, and was sold for $210,000 at the 2016 Inglis Australian Easter Yearling Sale.

“(Trainer) Mick Price syndicated Miss Admiration and Segenhoe took a 50% share which looks to be pretty good value after Saturday’s win,” Mitchell explains. “She’ll now head to the Group One Heineken 3 The Metropolitan (over 2400m at Royal Randwick) this Saturday and she’d have to be a very good chance with only 50kgs.”

Owned by prominent businessman, Kevin Maloney, and encompassing Segenhoe Stud – one of the most famous thoroughbred properties in the Hunter Valley – Segenhoe Thoroughbreds has “bits and pieces” in 50 racehorses and owns 50 broodmares.

Indeed, it was a homebred from the crop of ’14, Winter Bride, who bookended Saturday’s double.

Now winning seven from 15 (with a further five placings), Winter Bride, swooped from the clouds at Caulfield to get up in a thriller.

Trained by Toby Edmonds, Winter Bride is by Not A Single Doubt from the Group Two winning mare, Amberino, who also has three winners from three to race.

“She (Winter Bride) probably races too keenly for anything further than 1200m so we’ll keep her to that distance for as long as possible,” Mitchell adds. “She’s a terrific racehorse and, at this stage, is likely to head to the (Group Three) Northwood Plume at Caulfield in three weeks.”

Interestingly, the Segenhoe raced 6-time stakes winner, Voodoo Lad, will race in the Group One Moir Stakes at Moonee Valley on Friday night before a tilt at the Group Two Schillaci Stakes at Caulfield … on the same day as the Northwood Plume.

Segenhoe General Manager, Peter O’Brien, was likewise thrilled with Saturday’s results, a culmination of the farm’s commitment to carrying on a rich tradition.

“Aside from our 50 mares, we also have another 100 on the farm which are owned by major clients throughout Australia,” O’Brien reveals. “We’ve also got shares in rising stallions such as Dissident, Sizzling and Hellbent and while we’ve previously sold just about everything we’ve bred off farm, we’ll be retaining five or six fillies each year to continue building up the broodmare band.

“Fortunately for us, both Pretty In Pink (a 2YO stakes winner, along with recent thirds in the Group Two Furious Stakes and Group Two Tea Rose) and Winter Bride had x-ray issues and weren’t sold and they’ll make terrific additions to the broodmare lineup when they eventually retire from racing.

“Another is Toby Edmonds’ dual stakes winning filly, Granny Red Shoes, who will also eventually head off to stud at Segenhoe.

“Plus, there are some very good mares already on the roster including Hurtle Myrtle (Group One winner), Sister Madly (3-time Group winner), Mimi LeBrock (multiple Group winner), Girl Hussler (dam of Group winning 2YO Taking Aim) and Captivating Claire who is likely to have a Gimcrack runner (Catch Me) for Yulong Investments this Saturday.”