She Will Reign … Again 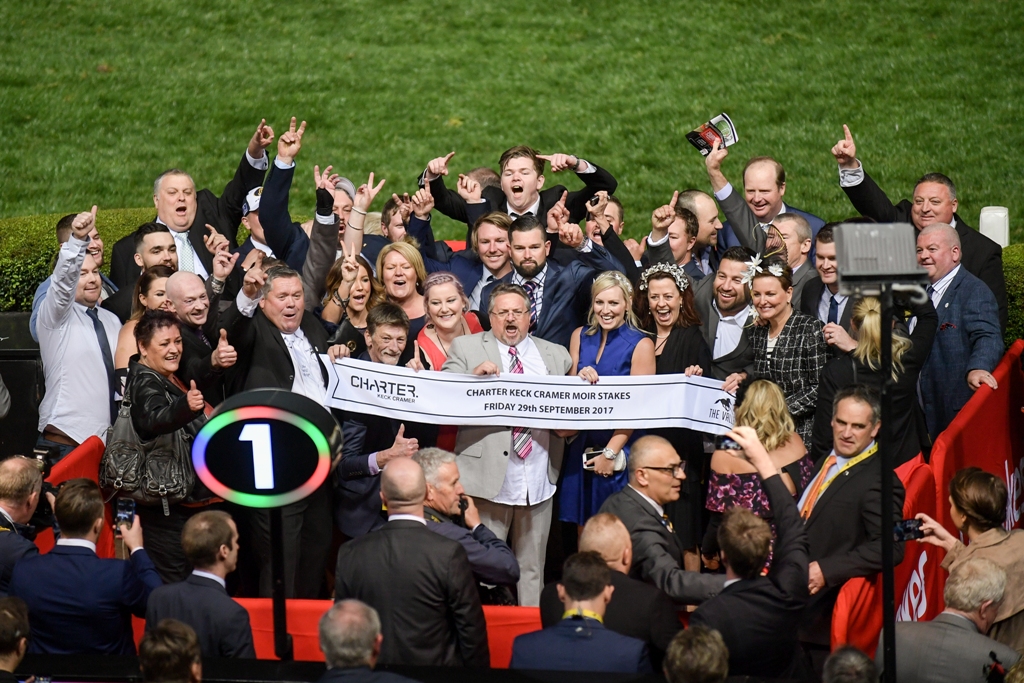 She Will Reign’s ecstatic owners celebrate her win in the Gr.1 Moir Stakes (Racing Photos)

Rossi Kewley has spent much of the last few days in the clouds. Literally and metaphorically.

The Sydney-based Kewley flew to Melbourne on Friday to watch his horse – his only horse – go around at Moonee Valley and, what’s more, she won.

Kewley was then back on a plane less than 24 hours after, savouring the victory and mightily happy for deciding to respond to an advertisement for horse ownership he’d spied back in early 2016.

Kewley’s horse, of course, is Australia’s most exciting filly, the Golden Slipper winner, She Will Reign, who returned to racing on Friday night with a barnstorming victory in the Group One Charter Keck Cramer Moir Stakes over 1000m at Moonee Valley.

The win wasn’t totally unexpected given that the filly was sent out a $4.40 second favourite, but most anticipated she’d have the job ahead with an awkward draw and was likely to settle well back.

That She did. And just to give you some idea as to her prospects in running, Melbourne race caller, Terry Bailey’s two ‘mentions’ before the home turn were: “She Will Reign is third last and ridden along” and, when approaching the final bend sitting 10th of 13, “She Will Reign will need to pull out a brilliant performance”.

From there though, She Will Reign put in a blistering turn of hoof to haul in the opposition, but even at the wire it appeared Viddora had poked her head in front. Fortunately for Kewley and co, the camera showed otherwise.

Not surprisingly, pandemonium ensued in the winners’ enclosure with She Will Reign’s connections showing that when it comes to celebrating, they’re in a Group One class of their own.

“Unforgettable!,” Kewley exclaimed after his return to Sydney. “I feel incredibly lucky … this is not just my first winner, it’s my first horse.”

A machine operator by trade, Kewley had seen an ad posted by Darby Racing for shares in a Manhattan Rain filly from Courgette, which had been purchased for $20,000 at the 2016 Inglis Sydney Classic Yearling Sale, and he decided to make some enquiries.

“I’ve loved horses for years and been keen on ownership for quite a while,” Kewley adds. “I was always looking at the syndication ads and something just clicked when I saw the one for a Manhattan Rain filly. I spoke to my wife about it and got the all clear from her, then phoned Scott (Darby) and got some more details.

With the Moir Stakes victory, She Will Reign has now raced on six occasions for five wins, a second and $2,859,150 in prizemoney. That figure could grow demonstrably if She Will Reign – now the pre-post favourite – should win the $10 million Everest at Royal Randwick on 14 October.

Kewley is quick to point out that part-ownership of She Will Reign has been a real ‘life changer’ and he is enjoying the ride to its fullest: “I’m more than aware that horses like this don’t come along every day. I’ve gone to see all her runs and all her trials for that matter. It’s great that they’ve all been ‘local’, but I didn’t mind travelling down to Melbourne on Friday,” Kewley adds with a laugh.

“There’s around 19 other owners and while I don’t know all of them, I’ve met the majority and become good friends with quite a few. And while I live in Sydney’s west, they come from all over … Western Australia, Queensland, Tassie.

“Take it from me, I can fully recommend horse ownership!”

She Will Reign’s victory was also a major boost for leading Victorian nursery, Blue Gum Farm, which secured the filly’s sire, Manhattan Rain, earlier this year at the behest of owners, Teeley Assets.

“What a marvellous win … hugely exciting,” Blue Gum’s Philip Campbell enthused. “For her to come down here as a baby and win the first time going that way (anti-clockwise), against that quality lineup of horses, is really something else.”

Blue Gum also stood Manhattan Rain’s sire, Encosta de Lago (114 stakes winners of $174 million), in that stallion’s ‘formative years’ and Campbell is quick to pick up on the similarities – particularly in the serving department.

“He (Manhattan Rain) is just like Encosta in the way he goes about his duties in the breeding shed,” Campbell adds. “A real professional and an absolute pleasure to deal with.

“Manhattan Rain covered 45 mares in September and 18 of his first 22 covers have already been tested in foal. Based on that, we’re still taking bookings and I’m pleased to say he’s been getting support from major breeders all over Australia.

“The thing that a lot of people tend to forget about this stallion is that he has only really got four crops of racing age … his current crop of 2YOs are his fifth. He’s had (Golden) Slipper runners in successive years with She Will Reign winning in 2017 and Scarlet Rain going into the Slipper undefeated in 2016.

“There’s not that many Manhattan Rains out there either: Whisky Baron won a Group One in South Africa this year, while Grade One won in Hong Kong on Sunday.

“If anything, Manhattan Rain reminds me of Rubiton who we got from NSW around the same stage in his career and he went on to produce over 40 stakes winners, including dual Cox Plate hero, Fields of Omagh.”

HOOFNOTE: She Will Reign has defied a ‘Golden Slipper hoodoo’ by becoming the first Slipper winner since Pierro in 2012 to win first up as a 3YO. Furthermore, she’s the only Slipper winner this century to capture a Group One upon resumption of racing at three.