So You Think you can’t get any higher… 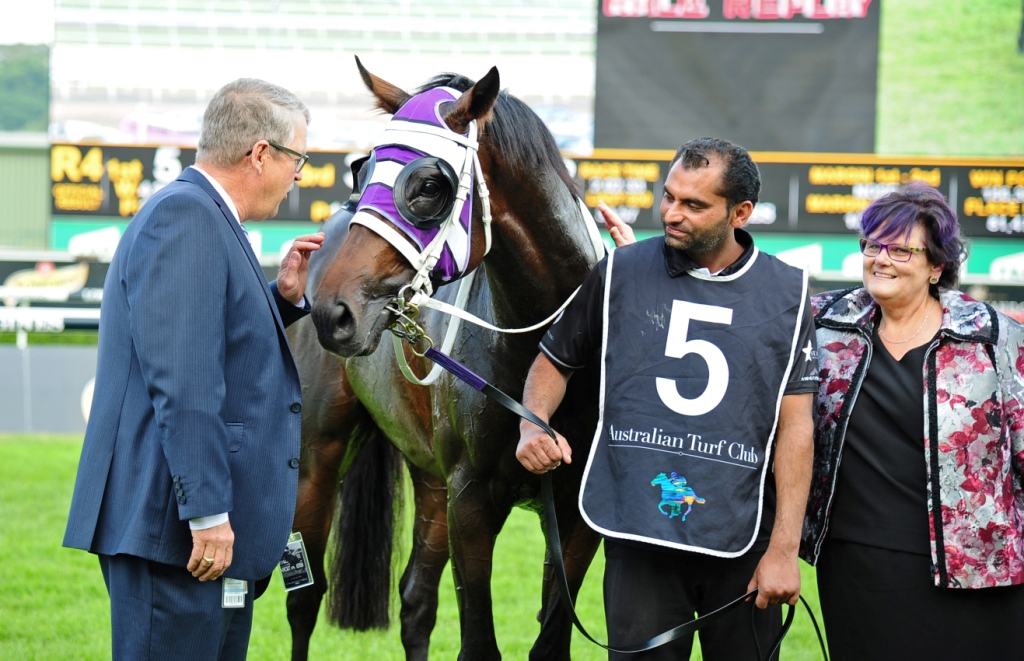 It wasn’t all that long ago when getting emailed a photo of your new born foal was deemed cutting edge.

My, how times have changed. A couple of days ago, a short 16 second video clip of a foal – filmed only moments after touching terra firma – was doing the rounds on Twitter.

On the video, a staff member from NSW nursery, Newhaven Park, is seen patting and wiping off the new arrival, simply saying: “so, a very nice bay colt”. Click here to view that video.

Racing for the first time last October and finishing a close second at Warwick Farm, Higher Ground has now won four of his eight outings, but the Packer was his first score at stakes level, and in the process became the 11th black type winner for dual Cox Plate hero, So You Think.

What’s more, the Coolmore Australia based stallion only had to wait another three hours before 3YO filly, Sopressa, made it an even dozen in the Group Three Schweppervescence Stakes over 1800m at Morphettville.

Higher Ground is owned by Debbie Kepitis who is, of course, no stranger to racetrack success. A daughter of Bob Ingham, the other half of Sydney’s most powerful racing bloc throughout the 70s, 80s and 90s, Kepitis is also the highly popular part-owner of the mighty mare Winx. Clearly she doesn’t need directions to the winners’ enclosure.

Kepitis’s Woppitt Bloodstock purchased Higher Ground from the Newhaven Park draft at the 2016 Gold Coast Magic Millions Yearling Sale, paying $210,000 for the privilege to race him.

“We always follow a process when looking to purchase a yearling,” Kepitis explains. “Guy Mulcaster (leading bloodstock agent) usually inspects every yearling at the sales and he picks out around 15 to 25 youngsters for us to have a look at.

“Woppitt Bloodstock consists of myself, husband Paul and our three daughters and we love trooping out to the sales … especially the Gold Coast as we make a real holiday of it as well.

“You can’t get your heart set on any particular yearling because we always stick to a budget … my father and uncle were famous for their big spending at sales, but for us, our spend is considerably more modest.

“I really like the So You Thinks though – they’re very pretty horses, like the Lonhros – and was happy to have secured Higher Ground as he was such a gorgeous type. Even happier after Saturday.”

Higher Ground is the first foal of Encosta de Lago mare, Dark Vision – a close relation to champions, St Reims, Champagne and Bonneval – who was purchased by Hong Kong agent, Apollo Ng, for $250,000 at the 2013 Inglis Australian Broodmare Sale. Dark Vision was subsequently dispatched to Iran in March 2016.

But how did Woppitt Bloodstock get its name?

“I’ve raced many horses over the years with uncle Jack and my dad and mum, plus my siblings, but Woppitt was the first one I raced outright with Paul and the girls,” Kepitis reveals.

“Woppitt won her first trial by six lengths and would go on to win five races, including a stakes race in Adelaide, along with a quarter of a million in prizemoney.

“We now race her progeny and while she hasn’t done much yet, she’s had a couple of winners (including Sydney winner Gossamer), plus we’ve got an unraced 2YO with Chris called Skillet (by I Am Invincible) and a Zoustar yearling. She’s currently in foal to So You Think, so I’ll be happy if that one turns out as good as Higher Ground.”

Purchased by young Victorian trainer, Kane Harris, for $60,000, the yearling is out of dual Group Two winner, Hidden Strings, while Sopressa herself has won two from nine and was originally sold for $70,000 as a weanling at the 2015 Inglis Great Southern Sale.

Like Higher Ground, Sopressa is destined for bigger and better things and is likely to next appear in the Group One Australasian Oaks over 2000m at Morphettville on 5 May.

Not surprisingly, Coolmore Australia is over the moon with So You Think’s continued success.

“So You Think is one of the hottest sires in the world at the moment, let alone Australia,” Coolmore Australia’s Paddy Oman enthused.

“He’s had six new stakes winners since 23 March, which is nothing short of phenomenal, especially when you consider his eldest runners are just 4YOs.

“He is a sire that gets runners in the big races on the big days and three of those stakes winners came during the Sydney Autumn Carnival.

“So You Think has been an extremely popular horse ever since he retired to stud and he, like Pierro, is an outcross to Danehill which only enhances his attraction to breeders.

“Speaking of Pierro he had another big weekend too. He sired his 50th first-crop 3YO winner on Sunday, while Action winning the (Group Two) WATC Derby for Bob and Sandra Peters was a particularly special result given their support of the sire right from the very start.

“The versatility of Pierro’s progeny is staggering, having produced stakes winning spring 2YOs, right the way through to Classic winning Autumn 3YOs.”