South African Barons On A High With Group One Winner 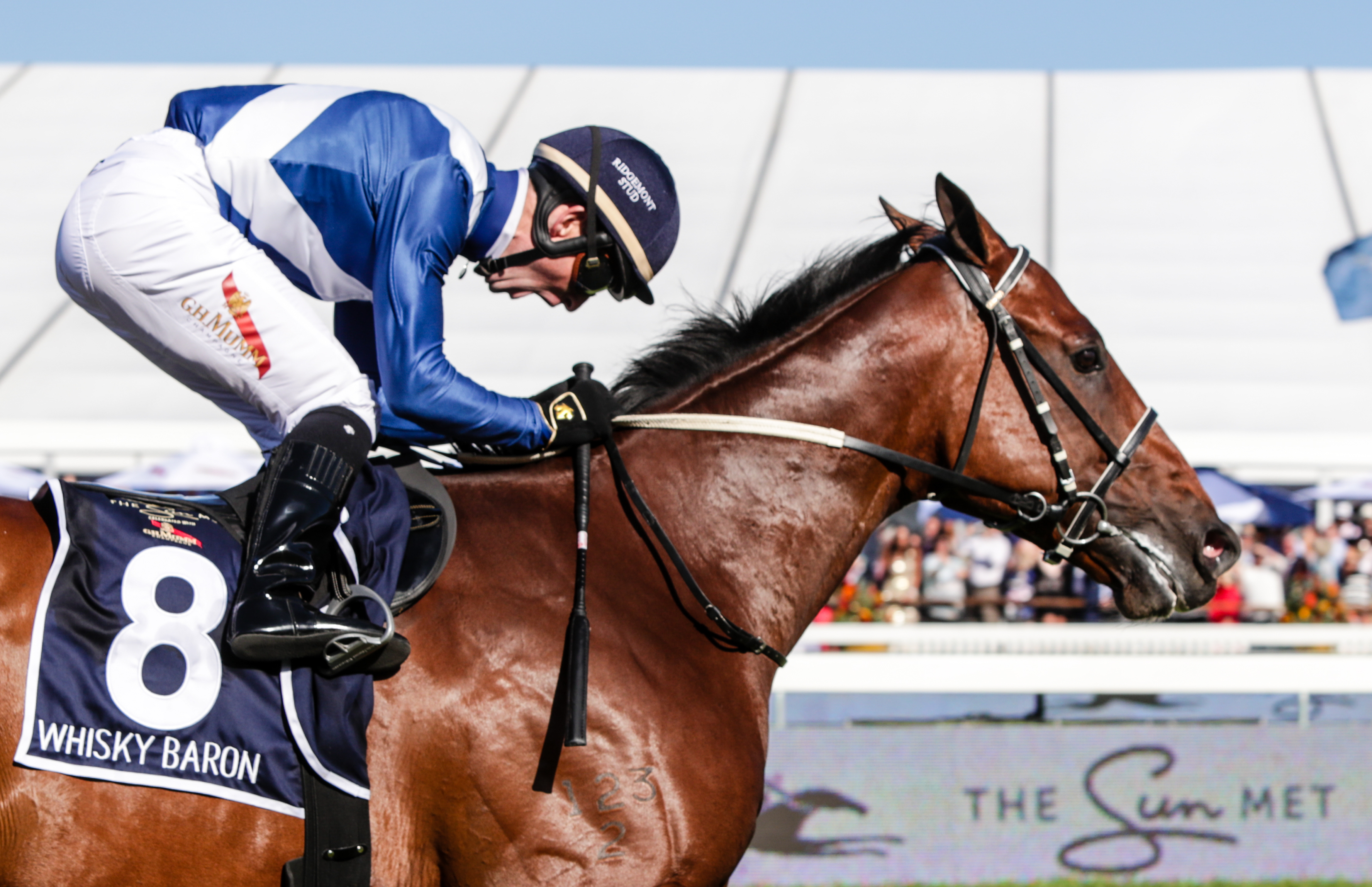 Whisky Baron wins the Group One Sun Met in South Africa over the weekend (Liesl King).

Australian-bred, Whisky Baron, is rapidly establishing himself as one of South Africa’s finest after a breakthrough Group One victory in Saturday’s prestigious Sun Met (2000m) at Kenilworth.

Trained by Brett Crawford, the son of Manhattan Rain had, early on, compiled a handy record of one win, six placings and a fourth – three of those starts at Group level – from as many outings, but a decision was made to geld Whisky Baron in June 2016.

The effect has been remarkable with Whisky Baron winning five straight, including his first black type victory (Group Two Peninsula Handicap on 7 January), culminating in his elevation to racing’s elite status on Saturday.

Whisky Baron’s rise and rise tends to mirror that of his owners, Craig and Ross Kieswetter who, along with parents Wayne and Belinda, form part of a rapidly growing racing and breeding empire in South Africa.

Craig has played cricket at an international level and is now part of the European golf circuit, while Ross got bitten by the racing bug when given a racehorse as a birthday present a few years back and now plays an active role in the family’s thoroughbred operation.

The Kieswetter boys have a healthy sense of humour too and were seen carrying a plaque after the Peninsula win which looked suspiciously like a replica of Whisky Baron’s um, crown jewels.

“Yes, they are indeed Whisky Baron’s ‘anchors’ on the plaque,” Craig Kieswetter explains. “Getting the brass impression was more to do with size than anything else … Ross was there for the gelding and both he and the vet were so impressed they decided to get them mounted.”

A slightly different perspective to be sure but it has had the desired effect on Whisky Baron and, by association, his success is having a profound effect on the brothers.

Recently, the Kieswetters’ purchased the famous Highlands Farm in South Africa’s Robertson Valley and as Craig points out, it represents the growing nature of their passion for racing and breeding.

“Our Ridgemont operation commenced a few years ago, more as a breed to race proposition,” Craig reveals. “The purchase of Highlands has altered the dynamics with Ridgemont now continuing with the racing arm and leaving the breeding side of things to Highlands.

“We currently have around 17 racehorses and some 25 broodmares, but the purchase of Highlands will only see those numbers grow.

“I’m proud to say that apart from Whisky Baron we have six other Australian-bred horses in our stable.

“Ridgemont has been coming out to Australia for the Melbourne Premier and Sydney Easter Yearling sales for a few years and, in light of Whisky Baron’s success, it would be a shame to break that tradition now!

“Whisky Baron was purchased from the Arrowfield Stud draft (for $50,000) at the 2014 Inglis Easter Yearling Sale and unfortunately we couldn’t make it out that year, but Ridgemont manager, Craig Carey, did the honours and, I must say, did a very good job of it too.”

While many of the Ridgemont horses – the fillies – race in green, blue and white silks, Whisky Baron proudly sports the blue and white of Scotland’s national flag. What gives? Something to do with Scotland being the ancestral birthplace of whisky and golf?

“We’re half Scottish, through our mum, and at one stage our father, Wayne, had a share in a malt distillery in Scotland. It took some discussion but we finally settled on silks for our colts that are reminiscent of the Scottish flag … the Saltire … St Andrew’s Cross.”

So, what next for their new Group One star?

“Well, the natural course would be to head for the Durban July or an international campaign, but we have a fantastic trainer and a very confident jockey, so they will be able to tell us what’s best for the horse.”

Whisky Baron is the fourth foal of the unraced Sinndar mare, Tazkara, a half-sister to French Group winner Tashelka and Listed winner Tashkandi. Like this season’s debut 2YO stakeswinner Azazel, he is a result of the Aga Khan/Arrowfield joint venture.
Tazkara has a 3YO filly named Pretty Snitzel in training with Kelly Doughty on the Gold Coast and, after returning to France in 2014, foaled a second filly by Snitzel. Now a southern hemisphere 2YO, that filly will be prepared by leading French trainer, Jean-Claude Rouget.
Tazkara also has a yearling colt by Excelebration and is in foal to the Shadwell stallion Muhaarar (by Oasis Dream).

Not surprisingly, Arrowfield was cheering on Whisky Baron as well and Bloodstock Manager, Jon Freyer, was quick to point out: “We’re thrilled to achieve this first Group One success for the Aga Khan-Arrowfield joint venture in such spectacular fashion. Our shared work and commitment is really bearing fruit this season with Whisky Baron, Azazel and a pair of $500,000 yearlings at the Magic Millions.

“It’s also been a milestone season for Manhattan Rain who has surely earned serious attention with brilliant juvenile She Will Reign, Group Two winning sprinter Wild Rain, Group placed mare Promise To Reign and 3YO Scarlet Rain who resumed with a win at Rosehill on Saturday.”