Stable Mates Is The New Connect To Ownership 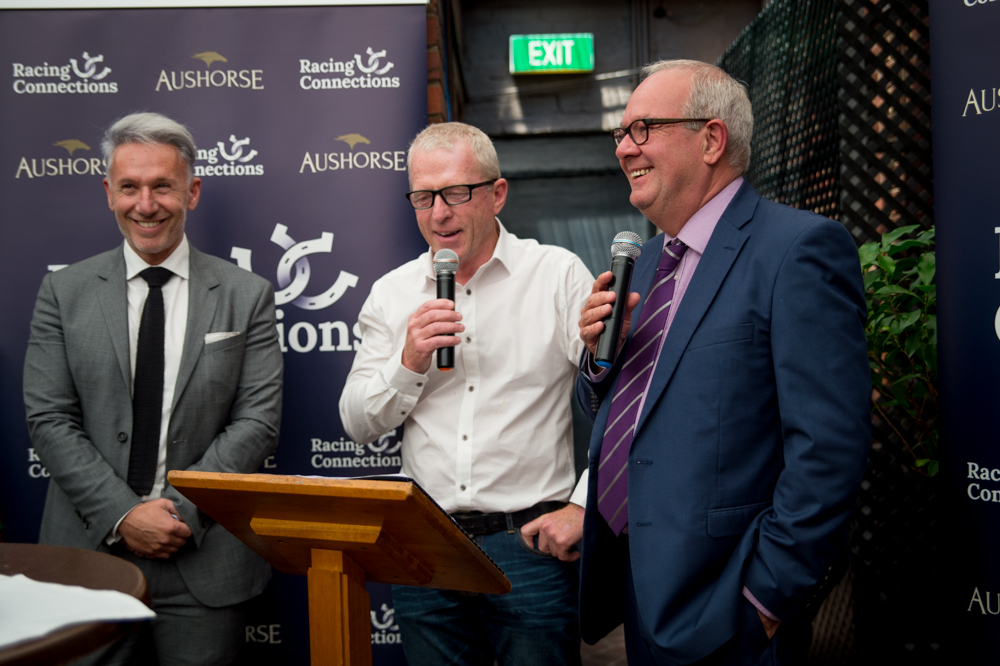 If successful businessman, Arch Staver, had to sum up his racehorse ownership experience in a word, he’d go with ‘intoxicating’.

Staver is part-owner of the exciting 3YO, Extreme Choice, which was originally purchased by Mick Price’s Bloodstock Manager, Luke Wilkinson, for $100,000 but has subsequently won over $1.6 million in prizemoney and, as a stallion prospect, is valued at many millions more.

Thing is, until fairly recently, Staver didn’t have the first clue about horse racing, let alone the often mystifying canons and parlance required to smooth the path to ownership.

“Of course, I knew who Bart Cummings was and famous race callers like Bill Collins, but I wouldn’t have known Mick Price if I fell over him,” Staver admits.

Staver was revealing his ‘experience’ at last week’s launch of Stable Mates, which forms part of a new brand called Racing Connections, designed specifically to educate aspiring investors about the myriad benefits – and fun – involved with racehorse ownership.

Driven by Aushorse, Racing Connections will provide potential owners with the opportunity to get a ‘feel’ of all the action by attending race meetings and spending time with leading trainers and syndicators.

The program includes a dedicated website (racingconnections.com.au) aimed at educating and empowering would-be owners, with a focus on providing accurate information and encouraging people to seek sound advice and set realistic goals before investing in a horse.

Racing Connections comes off the back of the most extensive ownership survey ever undertaken in Australia. Nearly 1800 people responded to a questionnaire, with almost half of them keen racing fans who had never owned previously.

Despite being regular race-goers with a positive view on ownership and what it involved, fans felt that there were huge entry barriers to ownership and only one in 10 of those surveyed knew where to start when buying a horse.

Additionally, survey participants said there were few places to go to get unbiased information on ownership and that unless they knew someone in the industry whom they trusted, they wouldn’t get involved.

“It’s a fabulous initiative,” Staver adds. “I think the more you can encourage people to get involved in racing horse then you’re doing them a favour as it’s such a wonderful experience.

“I’ve never been involved with anything this intoxicating and although we’ve been very lucky with Extreme Choice, people need to understand it’s not just about winning.

“You meet a lot of people and the whole journey is a lot of fun … you don’t need to own a Group One winner to enjoy it. Even if you get a Manangatang Maiden winner it’s a tremendous thrill.

“The important thing to remember is don’t overthink it. Just commit the money you can afford and sit back and enjoy the ride!”

Aushorse CEO, Tom Reilly, said that the survey had provided some valuable insights as to why racing fans were reluctant to take the next step and become owners.

“These people are deeply engaged in racing but feel they lack the knowledge and confidence to become owners,” Reilly points out. “Racing Connections will create a trusted source of information and provide support for would-be owners, so that they feel confident investing in the industry for the first time. We also want to help build connections between would-be owners and trainers and syndicators through Stable Mates.”

People can register for Stable Mates at racingconnections.com.au, where they will be asked to complete a short questionnaire aimed at identifying their expectations and preferences regarding ownership.

Aushorse will then work alongside trainers and syndicators to identify suitable opportunities for participants to attend the races and experience the world of ownership.

Topics covered by the Racing Connections website include different types of ownership, costs, rewards, bloodstock sales, health and wellbeing, and the welfare and retirement of racehorses.

There is also a section dedicated to racing which provides handy information for novice racegoers, including how to read a race book, along with tips for enjoying a day at the races.

Brad Spicer is one of the nation’s most successful syndicators and is responsible for introducing a lot of people to ownership, with his ‘finds’ including Group One heroes Starspangledbanner and Commanding Jewel, plus recent Group Two winner, Awesome Rock.

“I’ve always been critical of our industry for not selling ourselves, so the ‘buddy’ system is a real positive for those who don’t know how to get involved,” Spicer points out. “As syndicators, we’re often the first step for prospective owners and it’s something we take very seriously. Racing Connections and Stable Mates will be a huge help for those seeking to find a way into ownership and those of us in the industry will get right behind it.

“I know from experience that when you take people into the owners’ room they get a real adrenalin rush when they see what’s going on and want to be a part of it … it’s a thrill like no other.”