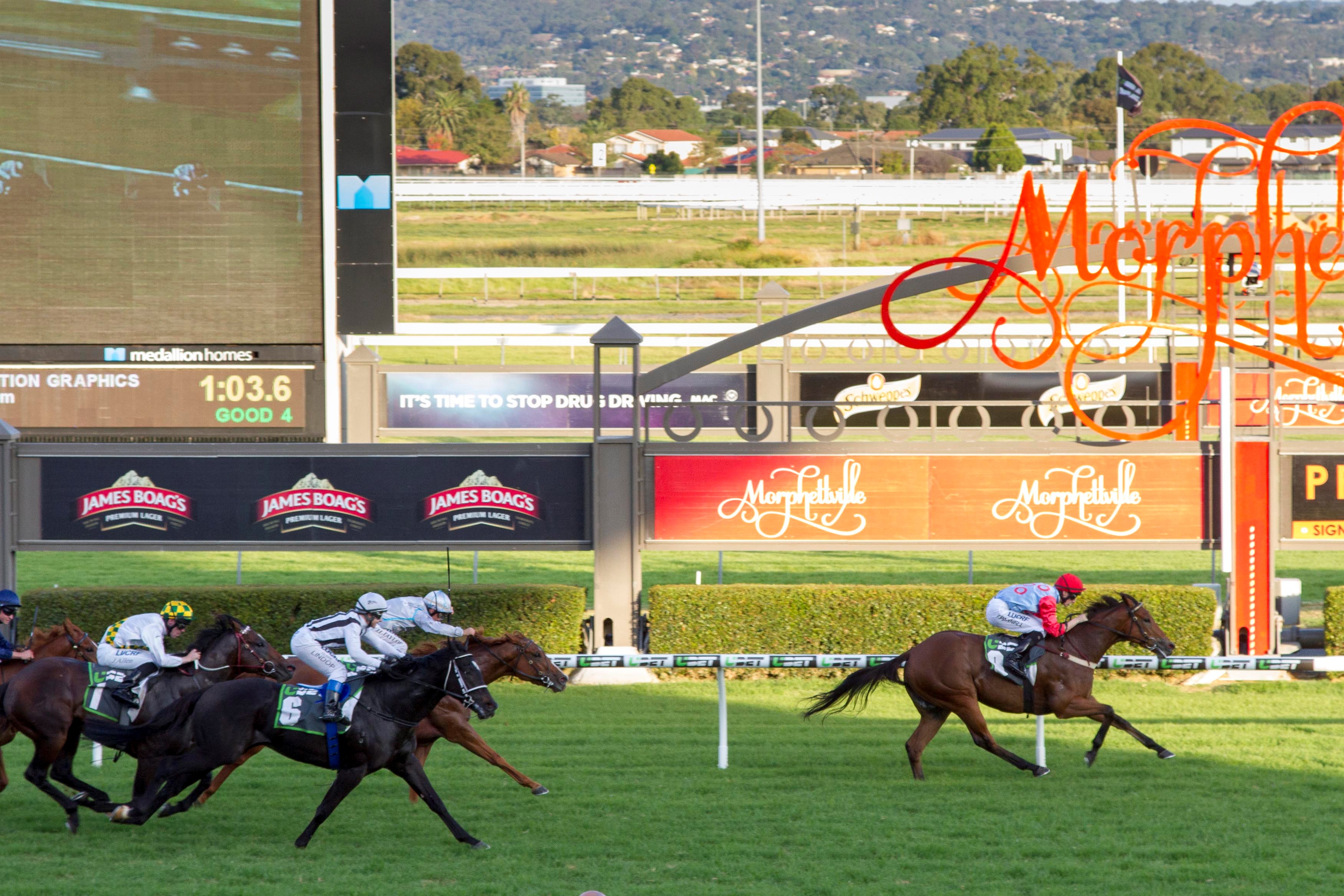 Desert Lashes makes in eight from eight at Morphetville in the Listed Redelva Stakes (Atkins Photography).

Reward for effort? Racehorse trainers might say that comes in the next lifetime, but Alice Springs’ Lisa Lefoe was rewarded for her 16 years of toil last Saturday when the brilliant filly, Desert Lashes, gave her rivals a licking in the Listed Redelva Stakes over 1100m at Morphettville.

It was the filly’s first win at stakes level but her eighth win overall … eight starts, eight wins.

Lefoe laughs when you mention that Desert Lashes only has 17 more to go before her flashy bay matches the deeds of another handy filly, but the Redelva is definitely a leap in the right direction and the trainer has some ambitious plans for her unbeaten sprinter.

“She’ll stay in Adelaide now and race in a fortnight in either the (Group One) Robert Sangster or the (Group Two) Euclase Stakes, both of which are over 1200m,” Lefoe reveals.

That is a big step up, but the manner of Desert Lashes’ victory in the Redelva – winning with over two panels to spare – has more than a few good judges sitting up and taking notice.

Desert Lashes could well end up one of the great bargain buys and has already banked $236,600 after Lefoe snapped the filly up for just $2,100 at the 2015 Inglis Red Centre Sale, just a couple of weeks on from when the Alice Springs Turf Club had purchased the yearling for $6,000 at the Inglis Melbourne VOBIS Gold Yearling Sale.

“There was nothing special about her that attracted me at the sales,” Lefoe admits. “She was just a nice, strong, little filly … and the price was definitely right!”

Racing for the first time in April last year, Desert Lashes won two at Alice Springs, was tipped out for six months, resumed with three wins on her home surface, and then sent to Adelaide in December where she made it an even half dozen.

Returning on 8 April, Desert Lashes won by nearly three lengths over the 1100m at Morphettville, leading into Saturday’s Redelva.

“I’ve got about 16 in work at Alice Springs, but Desert Lashes is remaining in South Australia for the time being and being looked after by my brother-in-law (and jockey-trainer) Shayne Cahill at Strathalbyn,” Lefoe adds.

Racing is clearly in the bloodlines as Lefoe’s father is the late, Mick Whittle, who trained over 500 winners in every mainland state and territory, plus winners at every racecourse in South Australia … the only trainer to achieve that feat.

Whittle also trained Roman Arch to win the 2003 Group One Toorak Handicap at Caulfield, up against the likes of Fields of Omagh, Umrum, Titanic Jack, Natural Blitz and Mr Murphy.

Lefoe might have a job ahead of her to lift a Robert Sangster with Desert Lashes, but courtesy of Mick, at least she knows what the inside of a Group One winners’ stall looks like.

And speaking of Reward For Effort, Desert Lashes’ Chatswood Stud based sire now has five black type winners to his name, including the Peter and Paul Snowden trained, triple stakes winner, Gold Symphony.

Desert Lashes is Misha’s Belle’s last foal however and, after sitting out the last three seasons, was officially retired from the Australian Stud Book earlier this year.