Ladies Day In The Sun … The Magic Of Racehorse Ownership 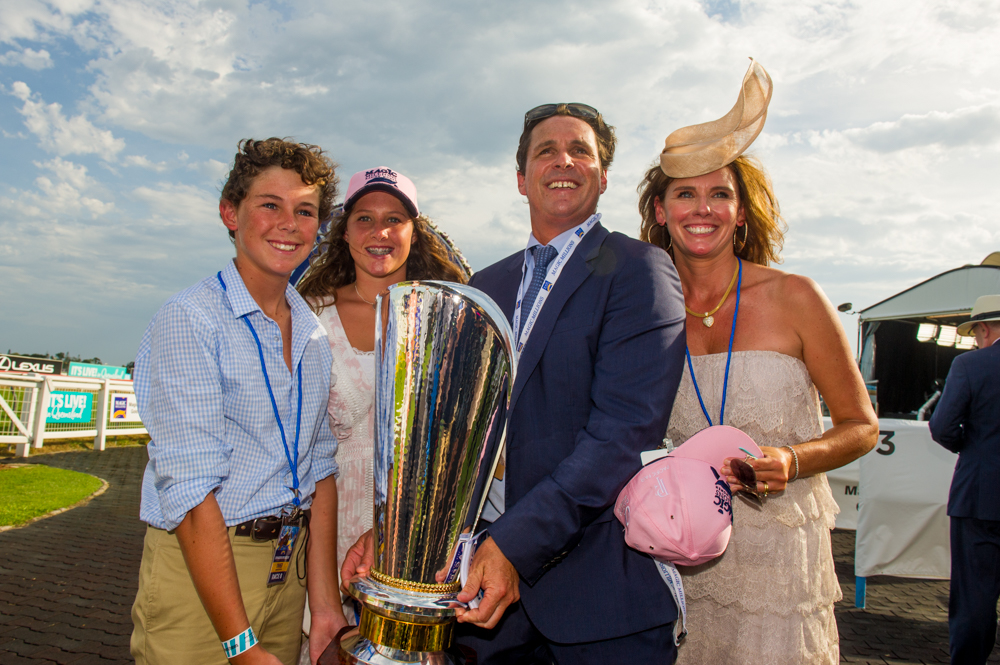 Racetrack success can be measured in many ways. Times. Margins. Group victories. Prizemoney.

But then there is the intangible. The sheer emotion – the thrill – of owning the winner of a $2 million race.

Few get to experience it, but therein is the allure. The Grail trail.

Katie Thompson and her fellow, female owners of Sunlight certainly got to experience it on Saturday when their filly captured the Magic Millions 2YO Classic over 1200m on the Gold Coast.

Despite the hot sun – literally and figuratively – thousands had packed into the Gold Coast racecourse, with many, many thousands more watching (enviously) on telly.

Leading into Saturday’s race, Sunlight had won two of three outings: finishing third on debut in the Listed Maribyrnong Plate at Flemington in October before resuming on the Gold Coast in December with a five length scamper over 900m and, in an ideal leadup, was equally dominant over 1100m there on 6 January. Both Gold Coast wins were class records.

Sure, barrier 12 for the Magic Millions 2YO Classic might not have been the best of draws, but Sunlight was still sent out a marginal favourite ahead of the (previously) unbeaten pair of Ef Troop and Jonker.

Although Ef Troop was the tearaway leader from the jump, Sunlight loomed shortly after turning for home and, in a matter of strides, it was all over bar the shouting. And shout they did.

What a tremendous advertisement for racehorse ownership this is. Katie Page, wife of Magic Millions principal, Gerry Harvey, initiated a bonus in 2012 whereby connections of the first four ‘all female owned or leased horses’ past the post in the 2YO Classic would receive a share of $500,000 … $325,000 for first.

It has inspired the formation of a large number of female owned horses: most notably the dual Group One winner, Global Glamour (by Star Witness), that is raced by 40 women from seven countries.

And it inspired Katie Thompson too, although it could be said she has a closer connection to Sunlight than most.

Wife of Widden Stud’s owner, Antony Thompson, Katie has been associated with Sunlight from early days, as the filly – a daughter of Widden’s resident stallion, Zoustar – was foaled down at their property.

“I didn’t have a great deal to do with Sunlight before she was prepped for the (2017) Gold Coast Magic Millions, but she was always a lovely type and had this real attitude about her,” Thompson reveals. “She can get a bit feisty alright.

“After Tony (McEvoy) purchased her for $300,000 with Julian Blaxland and Aquis Farm, a few of us decided to keep a share. We’ve long had a close association with Sheikh Fahad Al Thani and Qatar Racing, co-breeders of Sunlight, so his assistant racing manager, Hannah Wall, is a shareholder: in fact, Antony and Sheikh Fahad’s bloodstock manager, David Redvers, purchased Sunlight’s dam, Solar Charged, from the 2014 Magic Millions Broodmare Sale.

“Another co-breeder in Dan Fletcher is from Emerald in Queensland and has been a very good client of Widden’s over the years, so he put in his wife and daughter, while Tony Fung’s wife, Loretta, is a shareholder as well, along with a couple of Tony McEvoy’s clients.

“It’s a nice, little group and been a great ride so far.”

Definitely a day Thompson won’t forget in a hurry …

“It was one of those times when you wish the day was 12 hours longer,” Thompson points out. “After the races, Widden sold a Snitzel filly for $1.1 million, capping off a brilliant week.”

Two days prior to the big race, McEvoy had purchased the full sister to Sunlight from Widden for $600,000 and Thompson explains that the same ownership group will race this youngster too.

“She (the yearling) is very much in the mould of her big sister,” Thompson adds. “Similar conformation and the same kind of attitude. Hopefully lightning can strike twice.”

Sunlight will now seek to emulate 2016 Magic Millions 2YO Classic winner, Capitalist, who went on to capture the $3.5 million Golden Slipper, but will first have a few more “swims” in Queensland before heading for a short break in the paddock.

Win, lose or draw come Slipper day, Sunlight has proven to be a tremendous launching pad for her sire, Zoustar, according to Thompson: “To win a race of this stature with your first crop is amazing … we were confident the Zoustars would develop into really nice 3YOs but to get such a good winner this early from only a handful of runners … well, that’s pretty special.