Magic Millions 2YO Classic To The River 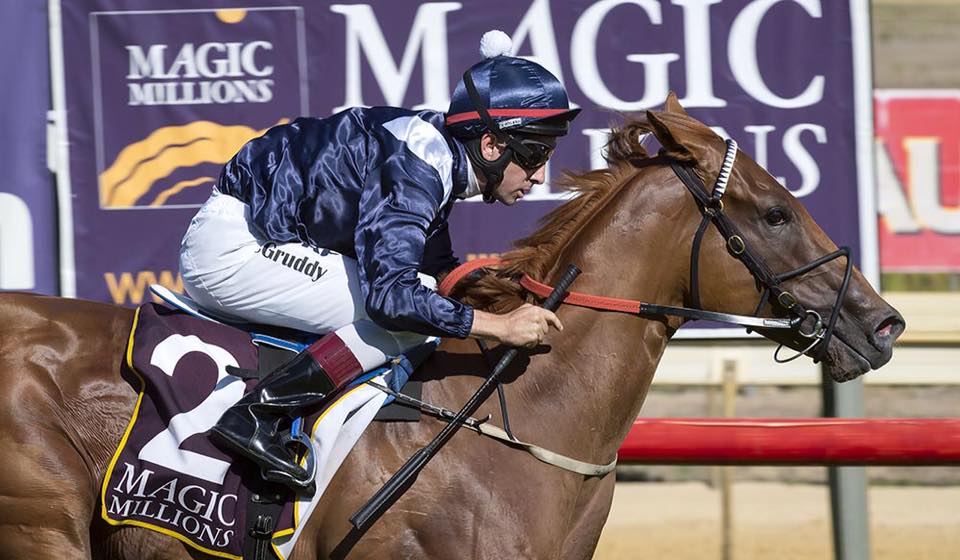 The River’s Magic Millions WA Two-Year-Old Classic win is likely to have buyers scrambling to secure his half-brother which will headline Perth’s Yearling Sale later this month.

Trevor Andrews managed to secure The River, a son of Magnus for $115,000, after it was offered by the Western Breeders Alliance – a partnership of three leading studs in the west. But it will be Jestceny’s latest progeny which is expected to fetch far more.

The Your Song colt will be offered as Lot 3 by Darling View Stud, Eioncliff Park and Westbury Park, who have shrewdly used their association to further promote the West Australian breed.

“Your Song was an outstanding racehorse himself and a Group 1 winner on the track and everyone seems to be very keen on these first season sires,” said Darling View’s Clive Atwell, whose stud bred The River on its property.

“We haven’t discussed a reserve price for him yet, but we’re expecting him to be quite popular. It’s a big boost for the sale as well to have a half-brother from The River headlining it and we’re hopeful of even getting some interest from the eastern states.”

The River’s three older siblings had all been winners on the track and the two-year-old is likely to challenge Magnifisio as the west’s best Magnus progeny after fighting off all challengers in the $250,000 race at Pinjarra on Sunday.

“It was a big thrill,” Atwell said. “The [Western Breeders] Alliance is used to attract a little bit more attention from buyers leading into the big sales and it’s worked quite well.

“The mare has now had four winners from her four foals so it’s a really good family. Her first foal [Jestpatim] probably could have almost won a Magic Millions [Perth Two-Year-Old Classic] too as he had had a really bad accident going out onto the track one day and had to miss two weeks of work leading into the race.”

A total of 349 lots have been listed for auction at Perth’s two-day Magic Millions sale which begins on February 15.