Mackinnon Is A Trap For Fools 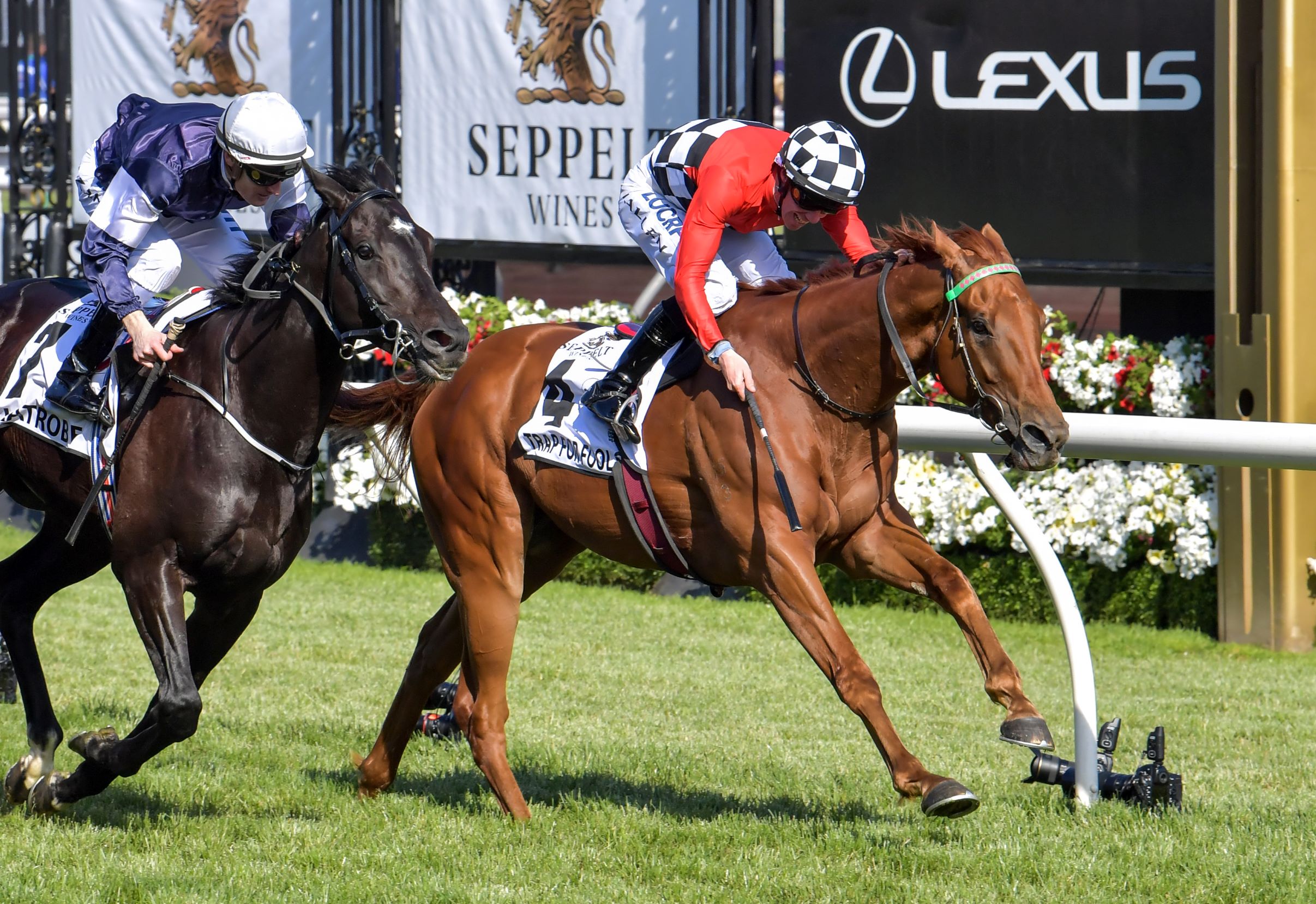 From go to whoa and coast to coast: the victory of Trap For Fools in Saturday’s Group One Seppelt Mackinnon Stakes over 2000m at Flemington was certainly celebrated far and wide.

For breeder/owner Geoff Evans his ‘urging’ was drowned out by the large Melbourne crowd, while Trap For Fool’s former trainer Lindsey Smith watched the race unfold on the “world’s oldest TV” at the back of Ascot racecourse in Perth.

And it definitely was some win. The Jarrod McLean trained, Trap For Fools had led from the jump and several times down the long Flemington straight it seemed as though he would be overhauled by the Irish Derby winner, Latrobe … the Victoria Derby winner, Extra Brut, too for that matter.

However, Trap For Fools held on gamely to get up in a nail biter much to the delight of Evans and Smith.

“I was sitting next to a good mate of mine in Rob Hickmott and it brought back memories of Almandin, who Rob trained to win the Melbourne Cup two years ago. He got up in a head bobber as well,” Evans explains. “I was all prepared to run second – and be happy with it – but Trap For Fools just kept holding on.

“A lot of people get excited about winning a sprint race, any race for that matter, but I do love the staying contests. I could rattle 20 Mackinnon winners off the top of my head … an incredible honour roll.

“Sure, you can have your share of low points in racing: I had (multiple stakes winner) Free At Last run second in a Craiglee and get balloted from the Turnbull and Melbourne Cup, while Rockferry was favourite for the 2009 Victoria Derby before finishing fifth.

“Still, it’s ‘batter up’ in this game. You take the good with the bad and Saturday turned out to be VERY good! You’ve just got to keep going.”

Trap For Fools is among 16 stakes winners for Dubawi stallion, Poet’s Voice, and is out of the Old Spice mare, Old Money, a full sister to multiple Group winner Old Cobber and closely related to Perth Cup winner, Linc The Leopard.

Bred and raced by Bob Peters, Old Money won the Group One WATC Derby, the Group Two WA Oaks and Group Two CB Cox Stakes before campaigning in the United States where she was multiple stakes placed.

Fortunately for Evans, Old Money was spied at a Keeneland sale in 2007 by astute agent, Damon Gabbedy, who managed to secure the mare, on behalf of Evans, for US$50,000.

“I’ve got a couple of horses with Jarrod (who trained his first Group One winner with Trap For Fools) and four or five with Lindsey Smith in WA, while there are around a dozen mares on my property at Serpentine (around 45 minutes south east of Perth),” Evans reveals. “I’m in my 50s now and been a fan of racing since, well, forever, and I bred (dual Group One winner) Lucky Hussler and also bred (4-time Group One winner) Alinghi with Joe Throsby.

“Sadly, Old Money died a couple of years back but I’ve got her last foal with Lindsey, an unraced 3YO called Too Close The Sun.”

Evans clearly had his day in the sun on Saturday, while Smith – who trained Trap For Fools for three successive stakes victories last November/December – couldn’t have been happier for Evans and McLean.

“I watched the Mackinnon from under the rotunda at Ascot – one of the few places on course where you can see the race and have a quiet ‘gasper’ in peace,” Smith points out. “Anyway, I was cheering like crazy and yelling out ‘go Bags’ which is actually the nickname of his mum, Old Money, who I also trained. There was some old bloke standing next to me who kept asking me ‘who is Bags’ and I yelled back ‘he’s the effing one in front’. Gee, it was a great race.”

Throughout his career, Smith has trained the winners of over 60 stakes races and is no stranger to success on the east coast, campaigning in Melbourne with 2004 Victoria Derby winner, Plastered, and 2002 Australian Cup winner, Old Comrade.

Winner of three Group Ones in Perth too, Old Comrade and current stable star, 2016 Railway Stakes winner, Scales of Justice, are among Smith’s many highlights.

However, if the trainer is unhappy to be ‘losing’ a steady stream of top notch gallopers to McLean, he’s doing a good job of hiding it.

“Jarrod’s a good mate and won a Grand National Hurdle with Cougar Express who had earlier won two stakes races in WA for me,” Smith adds. “I’m also sending across Prize Catch who won the (Listed) Ascot Gold Cup for the stable on Saturday.

“The trouble is that a lot of the very good horses get weighted out of races over here and you don’t want to stifle their opportunities so you just cop it on the chin.

“However, you can tell Jarrod for me that he can reciprocate any time he likes – can’t keep sending everything across to him wrapped in a big, red ribbon!”