Pure Artistry…a win for the ages 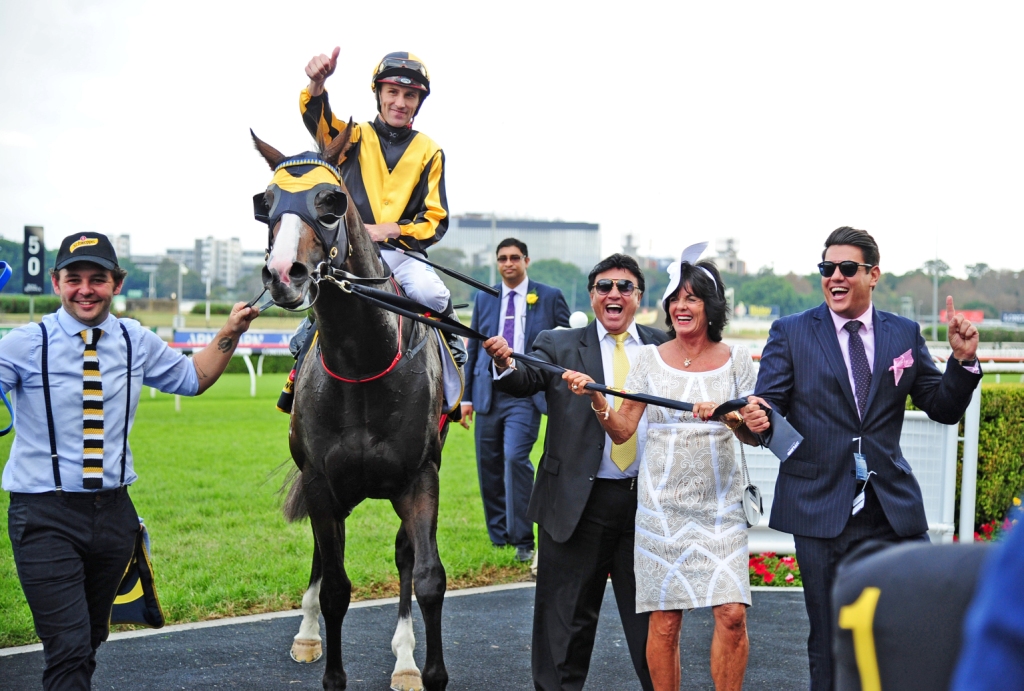 Given that two other colts had already made a million or more before his horse even made it into the ring, Vieira considered it a fair ask.

However, bidding stalled at $300,000 and a bemused, if not a tad miffed, Vieira decided to take the colt home and race it himself.

Turned out to be a very good move on Vieira’s part as the colt – now named Trapeze Artist – won his third Group One title in the time honoured Schweppes All-Aged Stakes over 1400m at Royal Randwick and is considered to be worth, in the vicinity of, $40 million.

Indeed, Vieira reckons he’ll be upping the insurance to $50 million.

Already Australia’s hottest stallion prospect before climbing into the ring on Saturday, Trapeze Artist made it a no brainer with his victory in track record time.

Low flying aside, it was some win. Trapeze Artist’s earlier victories – the Group Three Black Opal at two (by 3 lengths), the Group One Golden Rose (by 4.3 lengths) and even the Group One TJ Smith Stakes a week prior the All-Aged – were all displays of sheer brilliance, but the latest offering was made of sterner stuff.

Trapeze Artist really had to grind it out on Saturday with Le Romain (Hard Spun) showing no signs of throwing in the towel and it was arguably the colt’s best performance thus far.

“He really had to work to win that, particularly against a horse like Le Romain who has won three Group Ones,” an elated Vieira points out.

“What a sterling horse!”

Trapeze Artist’s record now stands at six wins and two thirds from 14 starts for $3,102,850 in stakes, but there is likely to be a lot more in the kitty by the time he hangs up his racing plates.

Answering racing’s biggest question, Vieira confirmed on Monday afternoon that Trapeze Artist is to continue racing – much to the relief of trainer Gerald Ryan and his many fans – and won’t be heading to the stallion barn until at least the 2019 season.

“His main aim in the spring is the ($13 million) Everest and, depending on quarantine issues, maybe he’ll go to Hong Kong in December.

“The aim would then be to take him to Royal Ascot next year, but it’s entirely up to the horse.

“He calls the shots … he obviously didn’t want to leave me in the first place, otherwise he would have been sold as a yearling.

“It was tempting in many ways to stand him at stud this spring and I’ve already had a few calls this afternoon from major farms, but I’m getting so much enjoyment out of this horse racing that we’re now going to try and climb Everest!”

Two starts back, in the TJ Smith, Trapeze Artist defeated 2017 Everest winner Redzel by two lengths over the Everest journey and Vieira adds that a decision is close to being made on which of the Everest slot holders will have the colt racing for them.

A son of Champion Sire Snitzel, Trapeze Artist is out of the Domesday mare, Treppes, a half-sister to Group One QTC Stradbroke Handicap winner, Crawl, dual stakes winner, Old Man, and to the dam of Melbourne Group Two winner and Group One VRC Australian Guineas runner-up, Marching.

Treppes produced a Wandjina filly last spring and Vieira intends to race her, while the mare missed to Snitzel in 2017, but is likely to be return in 2018.

“I have outlaid a fortune since getting involved in the thoroughbred industry around 10 years ago,” Vieira adds.

“I’ve got about 30 racehorses and some 65 broodmares, but the number of broodmares will increase because I fully intend to support Trapeze Artist when he eventually goes to stud. He is the best and deserves the best.”