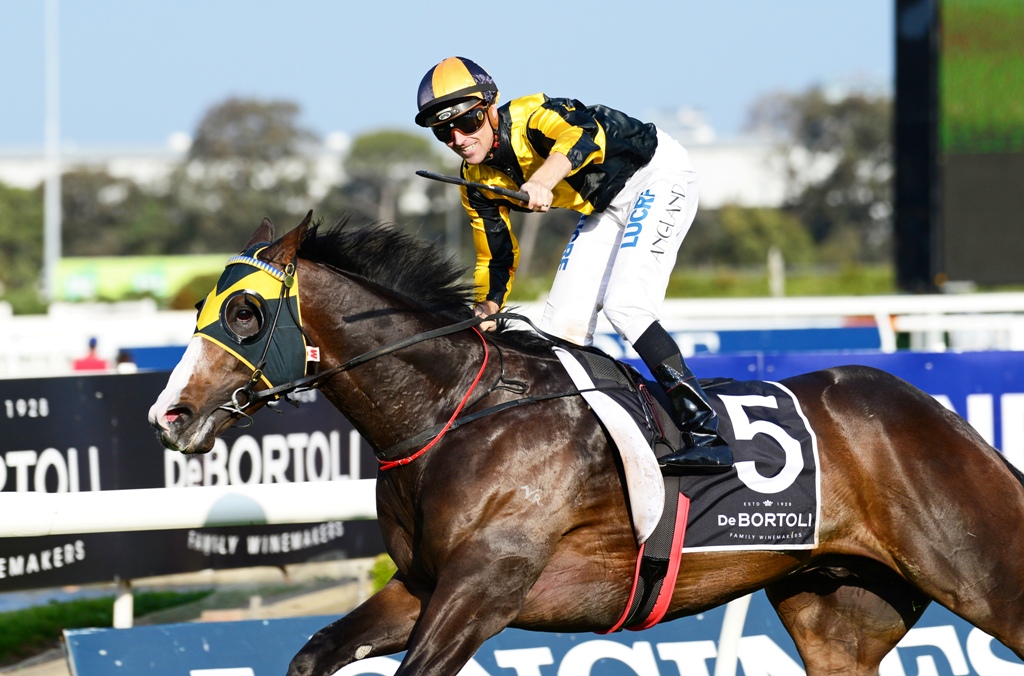 By his own admission, Bert Vieira has outlaid “a fortune” since getting involved in the thoroughbred industry around 10 years ago.

The successful businessman has 30 racehorses in work and some 60 broodmares on the books, but numbers were the last thing on his mind on Saturday.

After all, Vieira’s 3YO colt, Trapeze Artist had just pulled off one of the high wire acts of 2017 by downing his much fancied stablemate, Menari, in the $1 million Group One De Bortoli Wines Golden Rose Stakes over 1400m at Rosehill Gardens.

It was some win … jumping from the outside barrier, Trapeze Artist settled midfield before turning for home the widest of runners.

A $41 pick, Trapeze Artist tracked Menari into the straight before jockey Tye Angland unleashed the colt 200m from home to win by over four lengths.

“I’ve spent a lot of money on this game, but don’t regret any of it,” a thrilled Vieira points out. “That was my first Group One winner and what a race to do it in … and with such a well bred colt too.”

A son of the Champion sire, Snitzel, Trapeze Artist first raced in February, winning his 2YO Maiden in style, and then secured a first black type victory two starts later in the Group Three Black Opal at Canberra.

Trapeze Artist subsequently finished midfield on a heavy surface in the Golden Slipper and ran third behind Invader in the Group One Sires’ Produce before heading for a spell, resuming at three with a sixth of nine in the Group Three Up And Coming (after leading for most of the journey) and a fourth to Golden Rose rival, Gold Standard, in the Group Two Stan Fox Stakes on 9 September.

“I have been saying for two weeks this horse has been flying under the radar because of the path I have taken with him and people just forgot about the horse,” Ryan explained. “I put blinkers on the colt third up in the Black Opal and he peaked just like he did on Saturday.

“I always thought Trapeze Artist would run top three and believe Menari was too close on a hot speed, but take nothing away from Trapeze Artist, particularly as he was wide all the way.

“It’s worth remembering that he was the second colt home in the Golden Slipper after not handling the heavy track and now he’s beaten them easily in the Golden Rose. Tremendous performance.”

Bred by Vieira, Trapeze Artist is out of the Domesday mare, Treppes, a half sister to Group One Stradbroke Handicap winner, Crawl and 3-time stakes winner, Old Man, while another half sister is the dam of Moonee Valley Group Two winner, Marching.

Although foaled down and prepared at John North’s Bowness Stud, Trapeze Artist was offered under the Vieira Group banner at the 2016 Inglis Australian Easter Yearling Sale, but ultimately passed in for $250,000 off a reserve of $300,000.

Albeit disappointed at the time, Vieira is naturally ecstatic with the end result.

“He was an absolutely lovely colt and I actually thought he’d make well over $300,000,” Vieira reveals. “However, we breed to sell and you have to be realistic. Anyway, he ended up coming home and now we’re very glad he did!”

As a well bred 3YO colt, Trapeze Artist vaulted into a whole new stratosphere with his Golden Rose victory and Vieira is confident he’ll add considerably to his worth as a stallion prospect when he takes on the Group One Coolmore Classic down the Flemington straight on 4 November … seeking to emulate boom sire, Zoustar, who pulled off the Golden Rose/Coolmore double in 2013.

“There was some speculation in the media that he would run in Saturday’s Epsom Handicap, but that won’t be the case,” Vieira adds. “He’ll have another run in about three weeks and then it’s on to the Coolmore.”

Vieira, meanwhile, is eagerly awaiting a half brother or sister to Trapeze Artist which is due to arrive at Bowness Stud around the time of the Coolmore.

“After producing Trapeze Artist in 2014, she missed in 2015 and then had a Zoustar colt which was sadly killed after running through a fence during a lightning storm,” Vieira notes. “She’s currently in foal to Wandjina and will be heading back to Snitzel this spring.”

HOOFNOTE: The victory of Trapeze Artist notches up another Group One winner for Bowness Stud ‘graduates’ and John North couldn’t be happier with the result.

“It’s terrific for Bert and his family,” North enthused. “Bert is a major client of the farm and we walk out his mares and foal them down. He’s made a major commitment to the industry and it’s wonderful to see it pay dividends.”

Preparing around 180 horses annually for sales throughout Australia (“only second to Gerry Harvey’s Baramul Stud”), the 3,500 acre Bowness set up shop at Murringo in NSW in the early 1980s, then acquired its 3,400 acre plus, Watershed Farm in 2005, rating for all its breeding and rearing activities. Meanwhile, a separate 200 acre property houses Bowness’s four stallions: Bullet Train, Myboycharlie, Walking or Dancing and Bon Hoffa, who produced his third stakes winner on Saturday via Bons Away (Listed Testa Rossa Stakes).