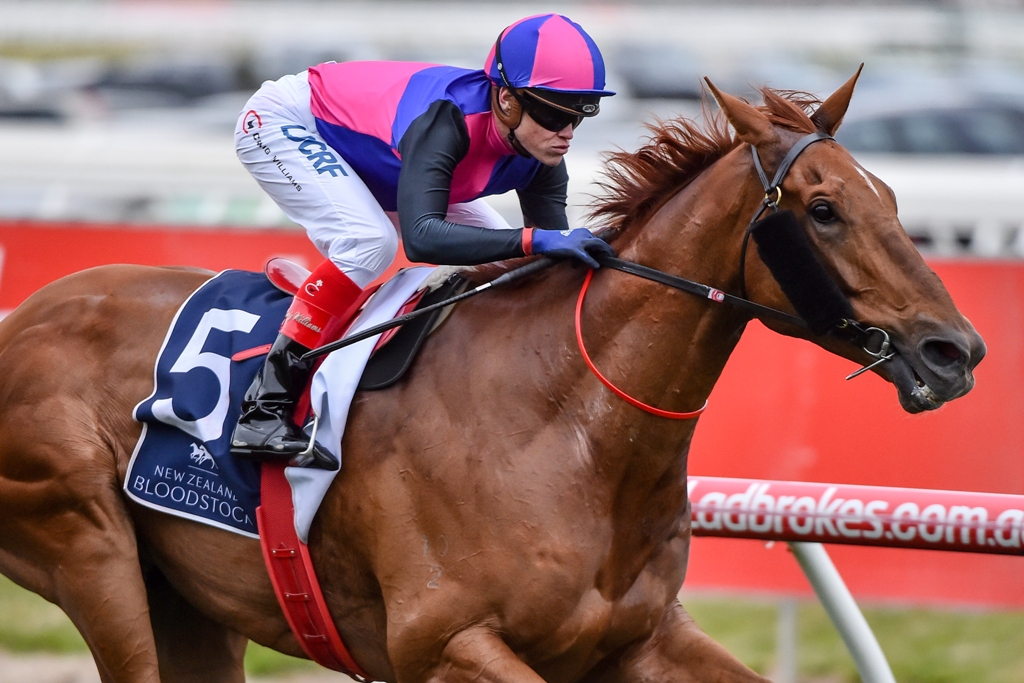 They say you can take the boy out of the west, but never the west out of the boy.

Wally Daly is a case in point. The proud West Australian bred and races outstanding sprinter, Vega Magic – along with his brother, George – and was on hand at Caulfield on Saturday to watch his pride and joy go around in the Group One Memsie Stakes over 1400m … and go around he did.

Defying the pattern of the day’s racing, Vega Magic led them for home in the Memsie and while 5-time Group One winner, Black Heart Bart, loomed large at one stage, the front runner had it all packaged up with 200m to go.

“I was very worried with the way the wind was going and no horses were leading and winning,” co-trainer, David Hayes, mused, “but Vega Magic dominated and finished it off in 10.8 seconds … it would have taken a mighty horse to get to him. He’s definitely got special qualities.”

Hayes’ Lindsay Park Racing Stables ‘inherited’ Vega Magic from Perth trainer, Sean Casey, earlier this year and he has since won three from three, including the Group One Goodwood Handicap at Morphettville in May and the Listed Regal Roller Stakes over 1200m at Caulfield when resuming last month.

Vega Magic had previously won two Group races in Perth – the AJ Scahill and Colonel Reeves – under Casey’s tutelage and the resume currently reads: 12 wins and three placings from 17 starts for $2,026,550 in prizemoney.

That tally could jump quite substantially in the next month or two with Hayes eyeing off races like the The Everest at Royal Randwick on 14 October or the Group One Rupert Clarke at Caulfield on 1 October.

“It’s $10 million up there (for The Everest) or he would also be a logical horse for the Rupert Clarke,” Hayes adds. “I’m thinking Everest at this stage but either way, wherever he goes, he’ll be very competitive.”

And either way, Daly will be front and centre: “I didn’t get across for the Regal Roller, but I’ve been on track for both his Group One victories,” Daly said on the eve of his return west.

“He truly is developing into a marvellous horse and full marks to David and his team. George and I are also indebted to Sean Casey for bringing the horse along the way he did. Sean took Vega Magic right through his grades and always believed in the horse. His faith was justified, that’s for sure.”

Vega Magic is by the Shamardal horse, Lope de Vega and is out of the multiple winning Magic Albert mare, Admirable, also bred and raced by the Dalys.

“George has always liked the Shamardals and that’s why we decided to send Admirable to Lope de Vega,” Daly explains. “Lope de Vega was a very good racehorse who won the French Derby and we basically supported the stallion for his four seasons in Australia, sending Admirable every year.

“George is a real student of Tesio – he’s read all the books – and just loves that Giant’s Causeway line. I’m more than happy to take his advice and it has certainly paid dividends with Vega Magic.

“Vega Magic was from Lope de Vega’s first Australian book, while the next year we got a full sister in Vega Dior. She’s only had the two starts for Sean Casey but won her maiden, first up, last week and is showing some ability.

“We also have a 2YO full brother that’s being broken in and will be trained by Sean too.

“As for Admirable, we sent her to (Caulfield Guineas winner) Shooting To Win last spring and she was due to foal last week. I’m like an expectant father … all on edge and just waiting to get the call!

“All things going well, Admirable will head to Exceed And Excel this spring.

“The aim is to produce precocious types and take advantage of the Sunspeed bonus system we have in WA.

“George trained Karrakatta Plate and Railway Stakes winner, Jacks or Better, but Vega Magic is our first Group One winner as breeders.

“We’re really proud that our horse has done so well on a national stage and I was saying to George the other day that the more he wins, the more you ‘lose’ ownership. He’s rapidly becoming the ‘people’s horse’ but he’ll always be WA bred!”

HOOFNOTE: Racing Victoria Handicapper and statistical maestro, Greg Carpenter – who also cut his teeth in Western Australia – was quick off the mark on Saturday, tweeting: “1-2 in Million $$ Memsie VEGA MAGIC beats BLACK HEART BART giving WA its 9th win in the Memsie Stakes – #TheRacesAreCalling” … as we say, you can take the boy out of the west …