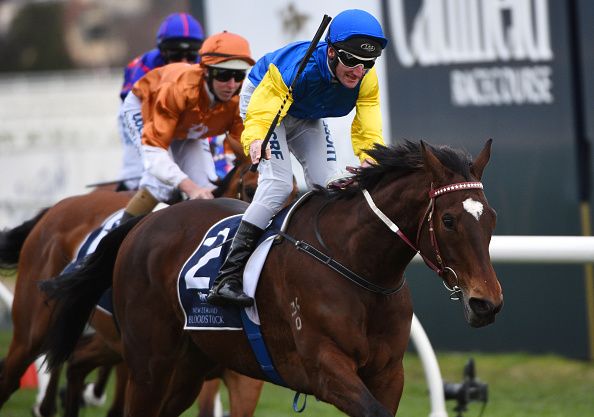 Will Black Heart Bart become the fourth horse this century to take out the Memsie Stakes / Cox Plate double in a calendar year?

More so, will Black Heart Bart become the first horse in history to win a Goodwood / Memsie / Cox Plate?

If he thinks Black Heart Bart has a real chance of pinching the silverware, who can argue?

After all, Black Heart Bart’s victory in the Group One Memsie Stakes at Caulfield on Saturday was very impressive from go to whoa and it’s also worth noting that in his last race in Western Australia, he ran second in the Group Two CB Cox Stakes over 2100m.

“The owners are keen to race him in the Cox Plate, so that’s what we will aim toward,” Weir points out. “He’s a great horse, gives his all. I loved the way he ran to the line in the Memsie.

“It’s difficult to gauge whether he’s getting better but I thought he was better first up this time around than last time in. We gave him three trials when resuming previously but only the one trial leading into the Memsie. Seems to have worked. A terrific horse.”

The owners would readily agree. Originally offered at the 2012 Perth Magic Millions Yearling Sale, the son of Blackfriars has steadily built his resume to 13 wins – 11 at stakes level – and 11 placings from 32 starts for $2,281,580 in stakes.

Importantly, the now 6YO has compiled the majority of those earnings in the last six months and, for what it’s worth, the first prize in this year’s Cox Plate is $1.8 million.

Not surprisingly, Western Australia’s Scenic Lodge – which both bred Black Heart Bart and stands his sire, Blackfriars – will be keen to see if their golden boy becomes the first WA bred winner of the Cox Plate since Northerly picked up successive Plates in 2001-02.

“That was a fantastic win in the Memsie,” Scenic Lodge’s General Manager, Jeremy Smith, enthused. “It will be very interesting to see if he can win a Cox Plate – especially if he’s lining up against a mare like Winx – but we’ll definitely all be cheering him on.

“It’s somewhat ironic that Blackfriars was held back a little in his stud career due to his major win being in the 2500m Victoria Derby, but he has since shown just what a versatile stallion he is with horses like Black Heart Bart, Playing God, God Has Spoken, Black Tycoon, Mansion House and Shining Knight winning over all distances.