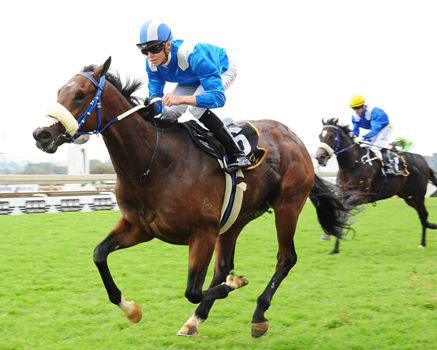 Talk about nailing your colours to the mast. The famous blue and white silks of Sheikh Hamdan bin Rashid Al Maktoum’s Shadwell Stud were again on prominent display at the star studded Turffontein program on Saturday where Australian-bred, brothers in arms – Mustaaqeem and Rafeef – both captured prized South African Group One races.

The flashy Shadwell owned, Mustaaqeem got the ball rolling with his success in the Group One South African Nursery over 1160m, clearing away to score by four lengths, having won his debut at the end of March by nearly eight lengths.

Closest to the unbeaten colt was another Shadwell owned, Australian-bred 2YO in Naafer, who is now likely to head to the Group One Gold Medallion at Scottsville later this month.

Meanwhile, Mustaaqeem’s 4YO full brother, Rafeef, wasn’t to be denied Group One glory either and posted a comfortable victory in the Computaform Sprint over 1000m, after hitting the lead a furlong from home.

Both Mustaaqeem and Rafeef are by the Arrowfield Stud based, champion sire, Redoute’s Choice, from the lightning fast National Colour, a South African Horse of the Year and Champion Older Sprinter in Britain who raced with distinction in South Africa, Dubai and England.

While Rafeef – sold by Arrowfield for $800,000 – was one of the major take aways from the 2014 Inglis Australian Easter Yearling Sale, Mustaaqeem was, at $1.75 million, the third highest price at Easter ’16 and Shadwell’s biggest buy at the sale.

Shadwell Stud’s Racing Manager, Angus Gold, laughs when reminded that he’d said that the bid of $1.75 million was all he had left in the tank, but is more than happy now he went the extra mile.

“We had already paid $1.5 million for a Redoute’s Choice colt (from Top Cuban) earlier in the sale and he was to be trained by David Hayes, but Mike de Kock was understandably keen to get hold of the National Colour colt. We’d already purchased two out of that mare and Mike also trains Rafeef,” Gold points out.
“It (the South African Nursery) was a very impressive performance by Mustaaqeem and while he’ll probably be put away now, there are a lot of options open to him moving forward. We’ll make up our mind in due course, but he could stay in South Africa or ultimately race overseas. It’s an outstanding pedigree and, who knows, he could end up standing in Australia one day!”

Certainly de Kock’s assistant trainer, son Mathew, would be keen to keep Mustaaqeem near and dear: “It was a fantastic result for Sheikh Hamdan who has been a great supporter of the yard. I’m hoping that one day Mustaaqeem will stand at stud in South Africa because this is the kind of blood we need here … Redoute’s Choice and the speed of his mother. I wouldn’t be surprised if I was instructed to export him though”.

Proving yet again that rhyme doesn’t always click with reason in the thoroughbred game, Gold adds that both Rafeef and Mustaaqeem are very much different types: “Rafeef is a bigger, more rangier type whereas Mustaaqeem has more quality about him. Better balanced. He looked like a 2YO from the start.”

While Mustaaqeem was strongly favoured to win his Group One, Rafeef had been somewhat overlooked leading into the Computaform Sprint, although de Kock had said earlier in the week that the 4YO was working the house down.

Previously winning the Group Two Hawaii Stakes, Rafeef has now notched up six from 10 and, like his little brother, is destined for a career at stud.

Shadwell Stud has been a major player in Australia for decades – both as breeder and buyer  – with many of their horses going on to star in South Africa.

“It’s difficult to isolate ‘favourites’,” Gold claims, “but horses like Majmu, who is also by Redoute’s Choice and was a Champion 2YO Filly in South Africa, or one that we bred in Australia called Ertijaal (Group One Cape Derby winner) are hard to top. Still, Mustaaqeem is definitely heading in the right direction.”