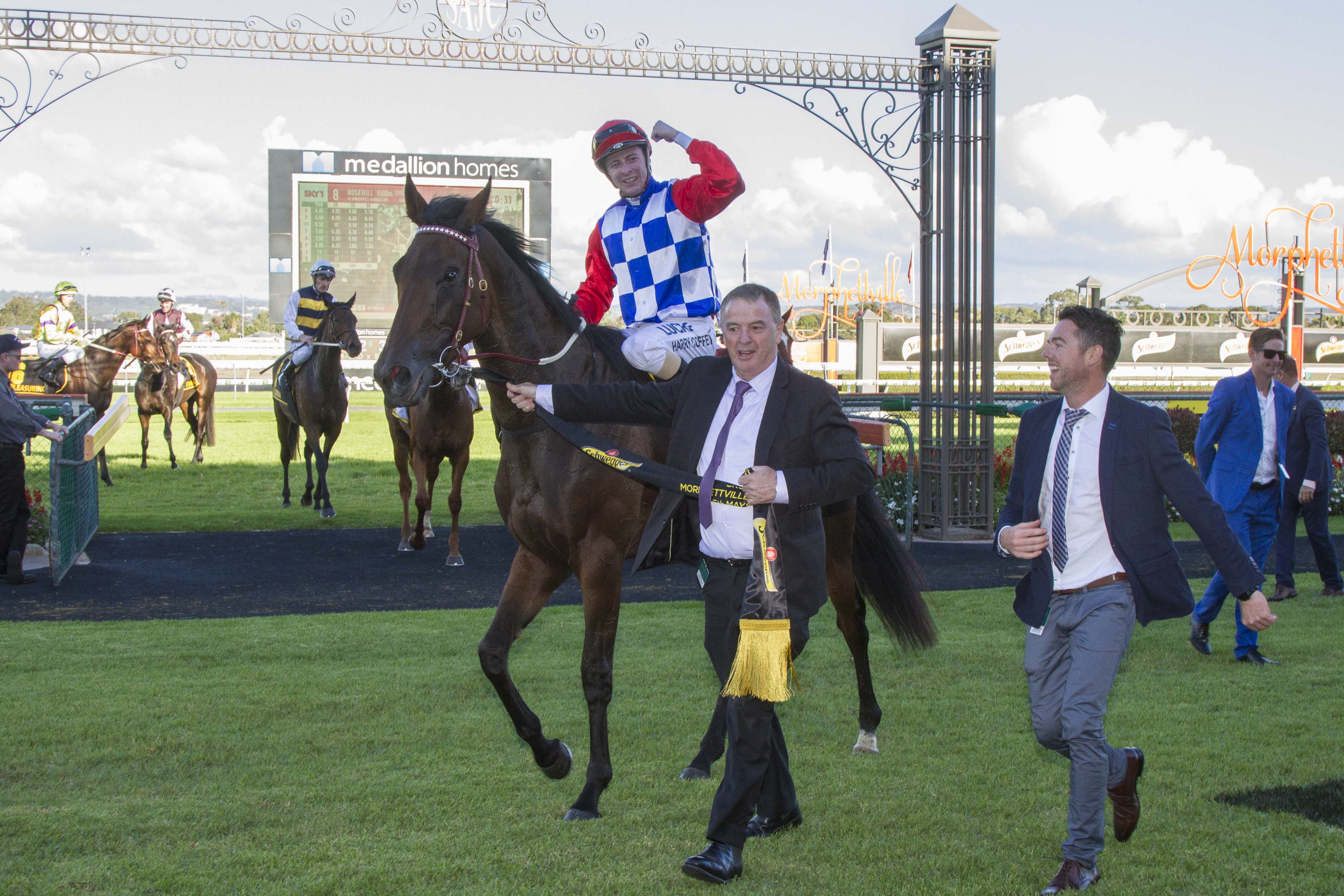 Every win is popular: be it the Melbourne Cup or a Manangatang Maiden.

They don’t grow on trees.

But some wins are truly special. Ones that stand out from the crowd.

Such was the case on Saturday with Sopressa’s victory in the Group One Schweppes Australasian Oaks over 2000m at Morphettville.

It was the 29th win at racing’s elite level for Darren Weir – which includes a Melbourne Cup – but the normally laid-back trainer was clearly relishing this one.

After all, the bloke who had done the steering – Harry Coffey – has been friends with Weir for literally a lifetime.

Harry’s father, Austy, according to Weir, was a driving force behind him first getting into racing as Austy’s Swan Hill stables are close to Weir’s home town of Berriwillock, some 350 kilometres north west of Melbourne.

Indeed, Harry Coffey’s first winner was aboard one of Weir’s gallopers, but this was to be the first Group One winner for the 22-year-old hoop.

That in itself is hardly unique, but given that Coffey suffers from cystic fibrosis, it was one ‘helluva’ mountain to climb.

As Racing.com’s Shane Anderson so poignantly described: “cystic fibrosis is a hideous life-threatening illness which makes breathing difficult. It brings on infection and sufferers have reduced life expectancy.

“Because of this, you rarely see elite-level sportspeople with cystic fibrosis … it simply takes too much out of the body. Harry shouldn’t be a jockey.”

Yet he is and a fine one at that.

The Oaks was Sopressa’s third win from 10 career outings with Coffey boasting a 100% strike rate on the filly, the most recent being her 4.3 length victory in the Group Three Auraria Stakes over 1800m at Morphettville on 21 April.

Sopressa is also the fourth Group One winner for the Coolmore Australia based, dual Cox Plate winner So You Think…following in the hoofsteps of La Bella Diosa, Inference and recent Rosehill Guineas winner D’Argento.

Sopressa, meanwhile, is one of five winners for the multiple Group Two winning Weasel Clause mare Hidden Strings, who was purchased in foal to So You Think at the 2014 Inglis Sydney Weanling and Bloodstock Sale for just $70,000.
The Lucky buyers were Cathy Webb and Ken Dean of the Victorian Stallion Partnership and they decided to sell the subsequent offspring – now named Sopressa – as a weanling, through the Bucklee Farm draft at the 2015 Inglis Great Southern Sale. She was bought for $70,000 by Ballarat’s Danny Molloy’s through his Dowling Park operation.

While Coffey had to wait 22 years for his first Group One winner, the Victorian Stallion Partnership has also had to muster up its share of patience.

Having scaled back its operation from standing five stallions in Victoria at one stage and up to 25 mares, Saturday’s win was breaking new ground.

“Ken (Dean) and I have been involved in the breeding industry for over 30 years, but it was our first Group One winner as well,” Webb explains.

“Hidden Strings was later sold, but we also bred a colt by Warhorse out of her which was sold through the Bucklee Farm draft for $60,000 at last month’s Inglis VOBIS Gold Yearling Sale … the day after Sopressa won the Auraria (Stakes).

“These days I’ve only got a share in Warhorse, a Group One winning 2YO by General Nediym, who stands at Bombora Downs, but it’s never too late to get your first Group One winner!”

Bucklee Farm’s Leeanne Smith couldn’t agree more. Opening her boutique 70-acre property at Greta West in the mid 90s with partner Peter Buckley (Buck-Lee!), they’ve only been seriously prepping horses for sale over the past decade or so.

“Sopressa was quite a forward foal, nicely balanced and well developed … she looked quite a bit like her mum,” Smith recalls.

“It’s terrific that she’s managed to win a Group One and good for the farm as well, but even more special given that Harry rode the winner. He’s a fine young lad and part of a lovely family. Great to see.”

While Sopressa was the first Group One winner Bucklee foaled, reared and sold, a second might not be that far in the offing.

Bucklee Farm also consigned 3-time stakes winner and Saturday’s Group One South Australian Derby hopeful Money Maher, while another of Weir’s top gallopers in Cliff’s Edge (winner of the Group Two Alister Clark Stakes in March) is a graduate of the farm. Both Money Maher ($58,000) and Cliff’s Edge ($60,000) were sold at the 2016 Inglis Melbourne Premier Yearling Sale.