Raising The Flag To Racing’s Queen 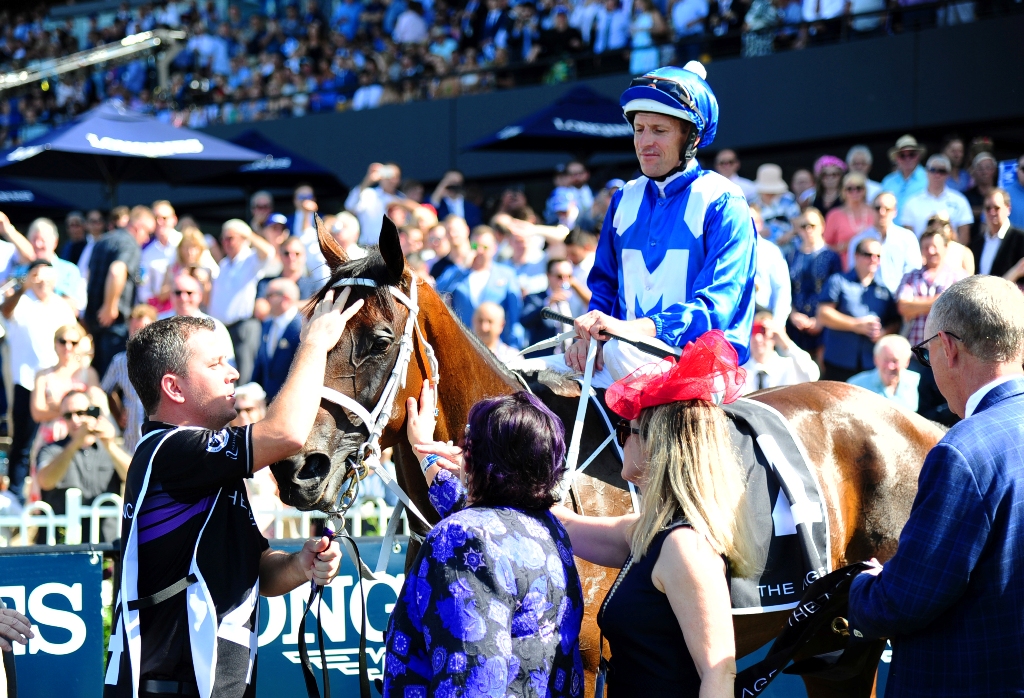 To the little kid gaily waving the Winx flag at Rosehill Gardens on Saturday, this wasn’t about the milestones.

Probably too young to count to 24, she was likely more bemused than anything else. After all, why were so many big people, jumping up and down, yelling and screaming – crying! – for a pretty horse that appears to be a whole lot quicker than the other horses.

Well, for starters, Winx is a lot quicker than the other horses and has been for at least the last 24 times she’s raced. Only one more to go and she equals the benchmark of 25 successive victories set by another racing immortal in Black Caviar, after SHE captured the Group One TJ Smith Stakes on 13 April 2013.

Here’s something else, kiddo. The George Ryder Stakes that Winx won on Saturday is way older than anyone at Rosehill on Saturday, being first run in 1903.

Seven horses have won the race twice: Lonhro, Campaign King, Emancipation (another pretty good mare!), Manikato, Foresight, Time And Tide and Prince Regoli. Winx is the first to win it thrice … all in a row.

Hmmm, what else? Well, for a goodly part of 2017, Winx was recognised as the No. 1 horse in the world on turf and the best racemare on the planet.

That changed two weeks ago when Winx was given equal billing at the top of the charts with the now retired Gun Runner on the Longines World’s Best Racehorse Rankings. And not a day too soon as the person next to you at Rosehill might suggest.

But the real biggie on Saturday? Winx became the first horse in the WORLD to win 17 Group One races. Previously the record (equaled by Winx in the Chipping Norton on 3 March) was held by North American legend, John Henry, namesake of a ‘steel driving’ folk hero who worked on railroad tunnels.

John Henry – the four legged version – got his name due to a habit of tearing his steel feed bucket off the wall and stomping them flat.

(Although Winx obviously has her quirks, it appears she’s content to just stomp her opponents flat).

Winx and John Henry had vastly different backgrounds though.

With not much in the way of ‘breeding’ to speak of, small and back at the knee, John Henry was originally sold as a yearling for US$1,100.

Winx, on the other hand, cost a lot more than US$1,100 when she was sold by Coolmore Stud, on behalf of breeder John Camilleri’s Fairway Thoroughreds at the 2013 Gold Coast Magic Millions Yearling Sale.

She was knocked down for $230,000 but it’s not likely owners Peter and Patty Tighe, Richard Treweeke and Debbie Kepitis will start complaining any time soon.

After all, while maybe we shouldn’t get ahead of ourselves, if/when Winx wins the $4 million Group One Longines Queen Elizabeth Stakes over 2000m at Royal Randwick on 14 April, she will take her earnings to a massive $18,883,925. Nothing really new to see here though as she was already the highest stakes earner in the history of Australian racing, prior to the Ryder result.

Some pundits might have been underwhelmed by the George Ryder victory, the fact that she was only three quarters of a length clear of Happy Clapper with Kementari another three quarters back in third. Still, Happy Clapper has won over $4 million in stakes and was fresh from a Group One victory at weight for age, while Kementari is acknowledged as the best 3YO in Australia after three successive Group victories, including the Randwick Guineas.

She got the job done.

And that, young lady, is why we were yelling and screaming at Rosehill.

For an industry born of punting, the $1.10 starting price gave us nought. It’s not what it’s about. It’s about being special. It’s about making spirits soar.

So, keep that flag kid. It might be something you want to show your own kids when they ask you what racing is all about.

HOOFNOTE: A decision will be made shortly – within the next 24 hours it appears – as to whether Winx will follow the lead of Black Caviar and other star Australian performers by campaigning in England later in the year.

Black Caviar raced in the 2012 Group One Diamond Jubilee, amidst unprecedented publicity and it was the start that she came closest to getting beaten.

Champion trainer-turned agent-turned commentator, Peter Moody, reckons it was BC’s “bravest performance” and if he had his time over again, “I would probably have taken her over a year earlier and prepped her differently”.

However, there are no regrets: “it was great for Australian racing”.

So, has Moody any advice for Chris Waller and co. as they agonise over should I stay or should I go?

“It’s an arduous trip, but no-one knows the intricacies of the mare like Chris and his team,” Moody muses. “They know what’s best for Winx and will make the decision accordingly.”

For the record, Black Caviar raced on three more occasions after returning from England – the Lightning, the William Reid and the TJ Smith.

Who knows, our Queen might still get to meet the other Queen and still win a fourth Cox Plate.