Winx – when only the best will do 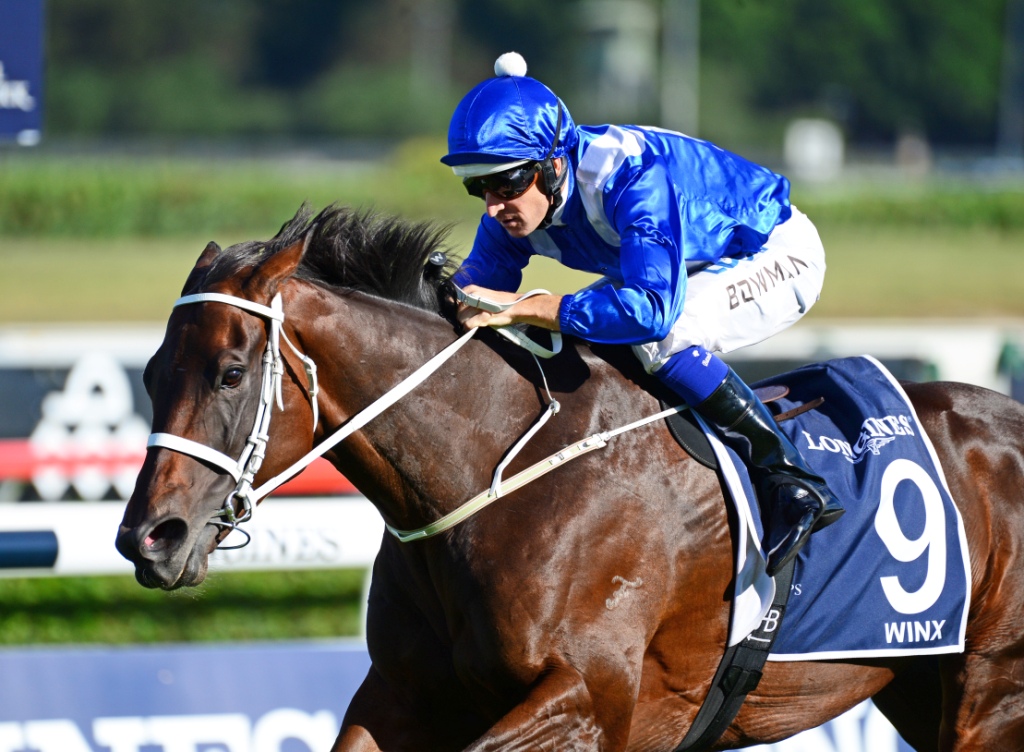 “mic drop. Noun. An instance of deliberately dropping or tossing aside one’s microphone at the end of a performance or speech one considers to have been particularly impressive”

It couldn’t have been more fitting. Peter Moody, trainer of racing legend, Black Caviar, and now commentator for Channel 7, rushes to interview Chris Waller, trainer of another immortal in Winx. Going for a spontaneous hug, Moody drops his microphone. The perfect metaphor for a near perfect racehorse.

Let’s face it, Moody was the only other person at Royal Randwick – or in the world for that matter – who could fully empathise with what Waller had been going through for the last 18 months or so.

As Winx’s tally grew higher, so did the pressure.

But after Saturday’s $4 million Group One Queen Elizabeth Stakes over 2000m, Moody and Waller became ‘tied’ in a way that history won’t forget.

For it was on Saturday 14 April 2018 that Winx won her 25th successive race – equalling that of Black Caviar who retired, unbeaten, almost five years ago to the day after annexing the Group One TJ Smith Stakes.

It was the same ‘stage’ for both horses too and an absolute gift for the second day of The Championships, a program with prizemoney of over $10 million.

Amazingly, when Black Caviar bowed out, many of us – if not most – thought we would never see her like again. Racing’s equivalent of Halley’s Comet.

But then along comes Winx and, on Saturday, the wonder mare was simply awesome.

Sure, the lead up to any of Winx’s races is not without its tension. In a small, all-care-no-responsibility fashion, we’ve shared the burden with Waller.

Her three runs in Sydney last spring – wins #18, #19 & #20 – were probably a bit more work-woman-like than spectacular, but then she blew‘em away in the Turnbull and broke her own record to capture her third Cox Plate in a row.

Resuming in the Chipping Norton she finished seven lengths clear, before a George Ryder that separated her and Happy Clapper by a mere three quarters of a length.

On Saturday, jumping from the widest gate, they offered the best odds – $1.24 – about Winx since last year’s George Ryder ($1.26) and for close to two thirds of the journey she shared last place with Happy Clapper.

There was something about Saturday though. With the risk of familiarity breeding contempt, she was always cruising, never losing.

Easy to say AFTER the event, but that truly was the stuff of legend in the Queen Elizabeth.

“It doesn’t get any easier, but once the day is finally here, I’ve done my job,” Waller explains.

“For the first time in a long time I sat down and went through the opposition … I have every respect for the other horses in the race, but she has been going as well as ever.

“We’ve got an amazing sport and it drives us all to reach our dreams.”

Jockey Hugh Bowman was perhaps more succinct but no less compelling: “The bottom line is that she’s got lengths on her rivals … it makes it easier for me.”

For the record – yes, another one – Winx is the fourth horse (and seventh mare) to win multiple runnings of the Queen Elizabeth, joining the likes of Tulloch.

(The Queen Elizabeth was first run in 1954, but the race itself is one of Australia’s oldest, dating back to 1851 when called the Queen’s Plate. Other notable winners include Archer, Carbine – 3 times – Wakeful, Phar Lap, Peter Pan, Flight and Russia – twice).

With the $2,434,500 yield from Saturday’s race, Winx’s earnings currently rest at $18,998,424 – nearly $4.5 million more than Makybe Diva’s previous benchmark – but the mind boggles at what the figure will be if Waller decides to chase down a fourth Cox Plate.

In terms of the world’s all-time leading prizemoney earners, Winx now sits in eighth position. Only horses racing in prizemoney-laden Japan and the two winners of the US$12 million-plus Pegasus World Cup (Arrogate & Gun Runner) sit above her in those standings.

If, for instance, Winx was to follow her 2017 spring campaign – Warwick, Chelmsford, George Main, Turnbull and Cox Plate – and win all five, the figure will zoom to over $21.7 million. Helluva return on her $230,000 yearling price at the 2013 Gold Coast Magic Millions.

Fittingly, the latest Longines World’s Best Racehorse Rankings were released last week and Winx remains the number one horse in the world (a shared billing with the now retired Gun Runner): and it’s safe to assume that everyone at Royal Randwick would concur with the top billing.

Perhaps the biggest question mark post-race though was where Winx sits among the pantheon of Australia’s racing greats?

Yes, she equalled Black Caviar’s record of 25 straight, but Winx has been beaten on six occasions. Winx has won more Group Ones though – 18 of them – and taken home more prizemoney.

But Black Caviar was a sprinter and Winx is a miler/middle distance galloper. Even if both were racing today, the likelihood of them ever meeting – apart from in photo opportunities – would be minimal to none.

As they say, comparisons are odious. Don Bradman was once asked if he was playing modern day cricket if he’d score as many runs. His answer? Yes, but it would take me longer.

Was Tiger Woods a better golfer than Ben Hogan? Thanks to titanium, probably yes.
Phar Lap? Bernborough? Tulloch? Vain? Kingston Town? Sunline? Makybe Diva?
Does it matter? On Saturday we were in the presence of greatness.