A Win With The X Factor 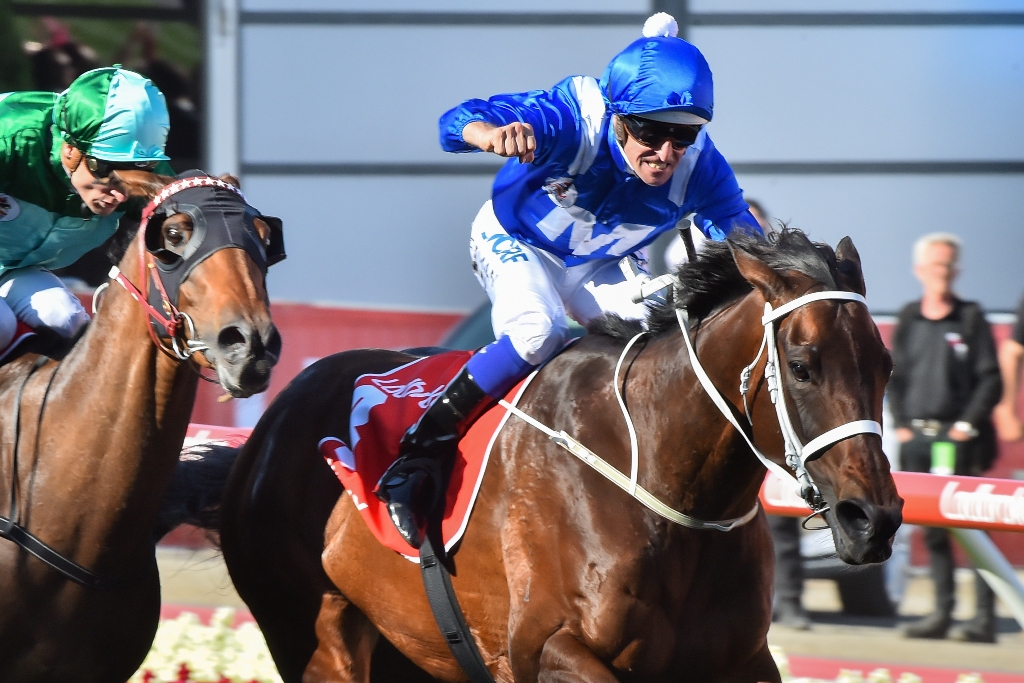 Seriously … where does the time go?

It can’t be 35 years since Kingston Town won his third Cox Plate from a seemingly impossible position?

Sadly, Bill is no longer with us, nor is Kingston Town, nor his incomparable trainer, TJ Smith. Nor, for that matter, is Michael Jackson, Ronald Reagan, Maggie Thatcher, Malcolm Fraser, the Commodore 64 or Olivia Newton John’s work out gear.

However, as Winx proved – again – on Saturday, greatness is timeless … well, maybe not ‘timeless’ as she broke the track record – again – in winning her third straight $3 million Group One Ladbrokes Cox Plate, but definitely immemorial. The stuff of legends.

It’s difficult to describe if you’ve never been to Moonee Valley, but it’s one of the few racecourses in the world that has that ‘up close and personal’ feel to it. A coliseum type effect.

Yet, instead of 32,000 plus spectators baying for blood, they were all practically – to a man, woman and child – screaming their heads off for Winx.

Little wonder. The week leading up to the Cox Plate was incredible. Courtesy of the window between footy and cricket, spring always takes racing from the back page to the front, but not quite like this.

We found out all types of interesting things about Winx. How she’s raced against 159 horses and beaten 52 Group One winners in the process. How her strapper hails from Turkey. How only one other horse had won three Cox Plates.

And OK, we didn’t find out what owner, Peter Tighe’s third cousin, twice removed had for breakfast, but it was probably there for the asking.

So, imagine the pressure … on the trainer, on the jockey, on the horse. As Winx was being lead out onto the track, we were informed that 97% of the ‘hold’ with bookies was all on the mighty mare. Unprecedented according to the man from Crown Bet.

Most of us were anticipating something special … particularly after Winx’s 6.5 length romp in the Group One Turnbull Stakes over 2000m at Flemington three weeks earlier. Her 21st successive victory. Her coming of age (or more specifically, the ages!).

Would this be like 2016 when she won the Cox Plate by eight lengths? Maybe even greater?

Not surprisingly, the noise from the crowd seemed to be putting Winx off a bit and she was a tad fractious in the barrier, but Winx jumped on terms and held a good position throughout. Indeed, on this occasion, race caller Matt Hill was almost Bill Collins in reverse, yelling “we’ve waited 35 years for this” as Winx cruised up to the lead with over 400m still to go.

But there was to be no cakewalk this time around. While Winx was handily in front at the 200m and appeared certain to serve up another Plate on a plate, Humidor was stalking and, for one brief moment, looked as if he might overtake the un-takeable.

But this is Winx we’re talking about. The mare, reminiscent of Black Caviar’s Royal Ascot scare, dug deep into the reserves and, bless her, didn’t come up short. God only knows how sombre the mood would have been lining up for a taxi outside the Valley if she’d got beat.

Underscoring the historic significance of the occasion, jockey Hugh Bowman (who appears as if he’s aged 10 years in the last week), summed up the enormity of the occasion by saying that he was born in the year Kingston Town won his first Cox Plate.

As Winx returned to, and filed past, the massive crowd, the mood was electric.

Spare a thought for trainer Chris Waller, who has largely been on a hiding to nothing since Winx was in her ‘teens’.

In the race to interview anyone with a connection to the stable among the crush in the winners’ enclosure, Waller’s wife, Steph, jokingly asked “is he crying again?”.

Ten, twenty years ago, many of us ‘manly-types’ might have laughed at a trainer getting so emotional after a win, but it’s bloody hard for us to scoff when you have a lump in your throat the size of a football.

In amongst all the chaos, Waller said he wouldn’t be rushed into any decision about Winx racing overseas next year, so we’ll have to wait until at least 2018 to get those answers.

For the record, Winx is currently ranked two shy of the world’s best racehorse, Arrogate, on the Longines Rankings and that is unlikely to change, even after Saturday.

The only avenue to global supremacy appears to rest with a northern hemisphere campaign, but do the thousands watching on course, or millions on television really care?

Winx, the horse that was sold for $230,000 at the 2013 Gold Coast Magic Millions Yearling Sale, is now the greatest prizemoney winner in Australian history with $15,627,925: surpassing the tally of triple Melbourne Cup winner and 2005 Cox Plate victor, Makybe Diva.

Is Winx better than the Diva? What about other multiple Cox Plate winners like Sunline and So You Think? Black Caviar? KINGSTON TOWN??

Again, does it matter? The late, great Bart Cummings once said of the many champions he raced: “don’t compare … just enjoy”.

Wise words, for on Saturday we saw a shooting star in the daytime. Enjoyed it? You betcha.