No Whoa For Wu … Or Hermitage 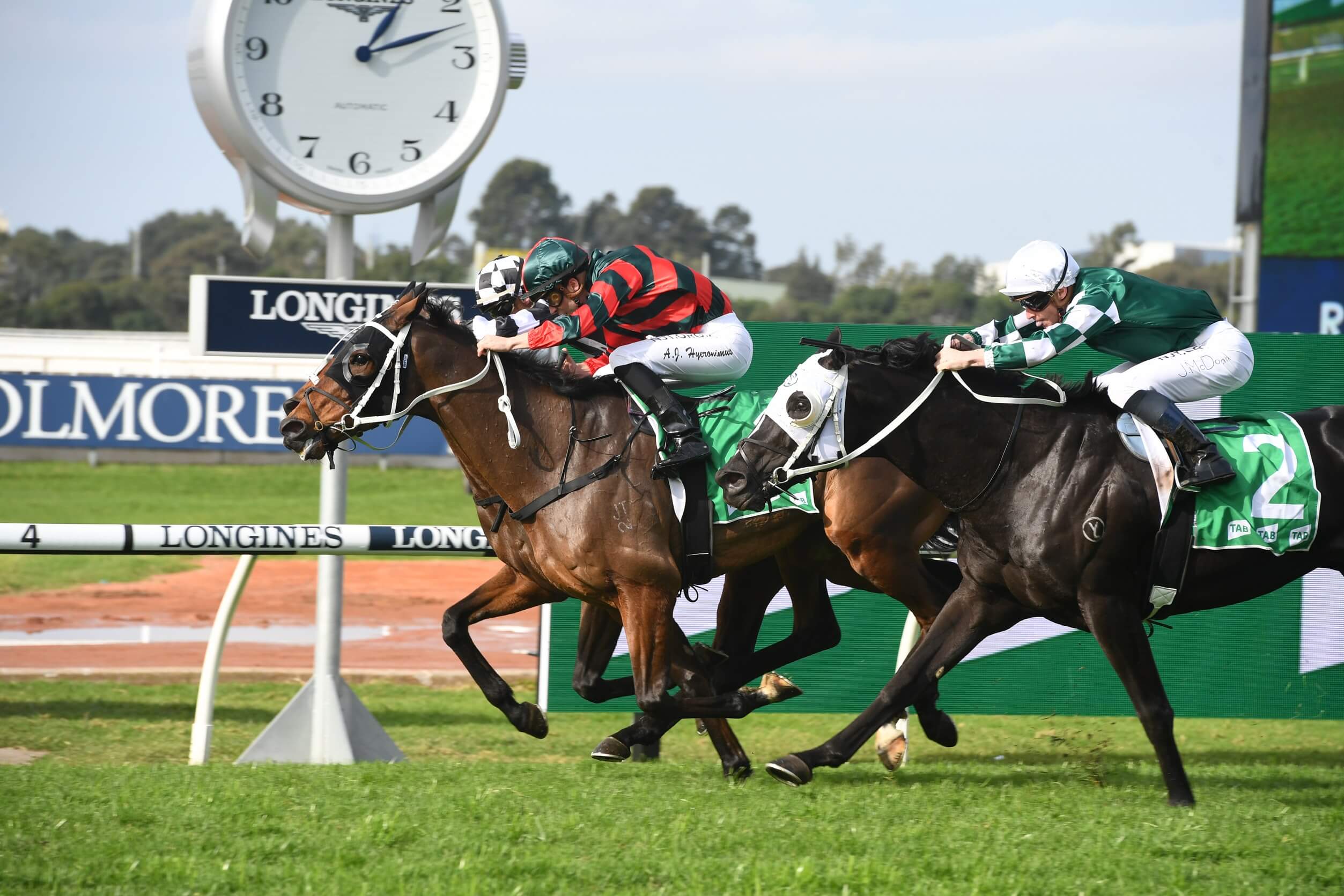 It might not have been Winx-like, nor was it a Group One, but the victory of Wu Gok
in Saturday’s Listed TAB Winter Cup over 2400m at Rosehill Gardens was definitely
one for the scrap book.

Sure, Wu Gok was highly favoured to become the first horse to complete the Listed
Lord Mayor’s Cup / Winter Cup in a calendar year, while the Heavy9 was tailor made
for a horse which had previously won eight of his 10 victories on soft surfaces.

What wasn’t anticipated however was the manner in which Wu Gok won the Winter
Cup: after leading for most of the journey, the Sebring 6YO was well and truly
headed by Yulong Prince and then Carzoff over the final furlong. It appeared as if
a meritorious third was on the cards.

But Wu Gok found reserves rarely witnessed at that level and fought back doggedly
to again overhaul Carzoff and a tiring Yulong Prince.

The victory takes Wu Gok’s stakes tally to four while his overall prizemoney sits at
$754,035 – a substantial return on the Robert Anderson bred / Widden Stud
consigned youngster that cost just $120,000 at the 2015 Inglis Easter Yearling Sale.

Purchased on behalf of Hermitage Thoroughbreds, Wu Gok is a half brother to
Group One Australian Derby winner, Levendi, and the Group winning Marcel From
Madrid, while Wu Gok’s dam – the stakes placed Lipari – is a daughter of Group One
Australasian Oaks winner, Tully Thunder.

“He (Wu Gok) is just such an honest horse and that was a phenomenal run on
Saturday,” Hermitage’s Shannon Beasley points out. “We absolutely love him on
farm and he’s a real favourite at Chris Waller’s stables.

“The uphill gallops at the farm have obviously helped and that win on Saturday
makes it two from two this time in. Overall though, he rarely puts in a bad run,
especially when it’s soft underfoot.”

The Winter Cup success continues the great run of recent seasons for Hermitage
Thoroughbreds which was established in 2011 by Hong Kong based Eugene
Chuang.

Situated on 250 acres at The Oaks – 80 kilometres west of Sydney – Hermitage has
a close association with Chris Waller Racing and, as such, has provided R&R to
such luminaries as Winx and Nature Strip.

Yet it has also been the launching pad for Hermitage’s own success stories: 5-time
Group One winner, The Autumn Sun, this season’s dual Group Two winner, Dragon
Leap, dual Oaks star, Egg Tart and, just two weeks ago, a stakes double courtesy of
Wu Gok and exciting 2YO, September Run. Kiwi Group One winner, Summer
Passage, has also spent time on farm.

Chuang – along with brother Henry – have raced horses in Hong Kong since the late
1990s and Hermitage is an extension of their commitment to the industry.

“We have always been passionate about horse racing and are long term members of
the Hong Kong Jockey Club,” Chuang reveals. “We’ve raced quite a few horses over
the years and it quickly became apparent to my wife, Karen, and I that an incredibly
important aspect of racing is the continued welfare of racehorses: from training to
retirement.

“That resulted in the development of Hermitage Thoroughbreds which we have spent
significant time and effort on developing into an all-round facility, suitable for rearing,
educating and preparing horses throughout their racing careers and beyond.

“We have quite a number of horses on farm – our own and those of friends – which
have retired and, quite frankly, where better to live out their days?”

A retired banker and financier, Chuang and his wife devote much of their time to
philanthropic pursuits, particularly in the area of childhood development and
education.

“I haven’t been to Australia since last year’s Easter Yearling Sale and unfortunately
the current travel restrictions have prevented me from returning,” Chaung points out.

“I was asked recently who is my favourite horse of all-time and I’d have to say it’s
The Autumn Sun.

“Winston Churchill once said ‘my tastes are simple: I am easily satisfied with the
best’ and The Autumn Sun really was the best.

“Through Hermitage we have had the good fortune to partner with some incredible
people, including the Chris Waller stable. Chris and his team do an amazing job with
the horses. Hopefully many more wins in store.”

HOOFBEAT: Fans of Yum Cha will be familiar with menu items such as Wu Gok and
Egg Tart (also by Widden Stud’s late More Than Ready stallion Sebring), with
Chuang crediting his young son with many of the Hermitage monikers.

“My son loves Yum Cha and we tend to name our horses in ‘series’ … his favourite
at the moment is the ‘Frozen’ franchise and we have a 2YO filly we purchased at the
2019 Inglis Easter Yearling Sale ($1.2 million) that’s named Pretty Elsa.

“She is by September Run’s sire, Exceed And Excel from a More Than Ready mare
and we have our fingers crossed she can live up to her name.”

Initially the Chuangs named their horses ‘Willie’, after their business operation, with
their first runner called Willie Way, the winner of five races and clearly a ‘hook’ for
future thoroughbred pursuits. Interestingly, two decades and 14 Hong Kong
gallopers on, their current ‘home based’ runner is 8YO More Than Ready gelding,
Willie Way.