Exceedance makes his mark among stellar group of 3YOs 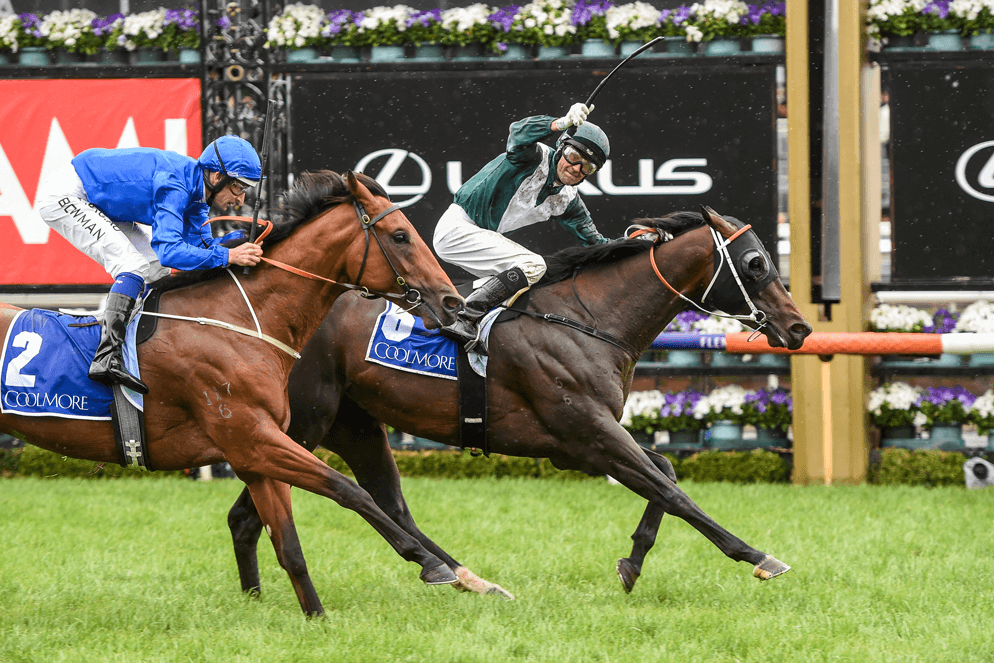 The signs were evident at the start of spring that Exceedance and Bivouac were among the best of a special crop of sprinting three-year-olds.

And as they fought out an enthralling Coolmore Stud Stakes, the colts have ended their rivalry for the time being with much more in common than sharing the same sire in Exceed And Excel.

Two colts representing two of the world’s most successful thoroughbred operations provided a final furlong joust over the Flemington straight that was a Victoria Derby day highlight.

Exceedance and Dwayne Dunn were the dream team! pic.twitter.com/1dCCk3nwOh

In the end it was the Vinery Stud-owned Exceedance getting the better of Godolphin/Darley star Bivouac.

It was a finish that has unfolded before during a few months of intense racing among our three-year-olds.

Exceedance had the better of his rival in the Group Three San Domenico Stakes at Randwick before Bivouac had his measure in the Group Two Run To The Rose.

Their first meeting at Group One level is likely to stand the test of time as one of the more significant results attached to the Australian breeding industry.

Bivouac relegated Exceedance into the minor placing in the Golden Rose as they were split by another brilliant colt in the subsequent Everest winner Yes Yes Yes.

It was Exceedance’s turn at Flemington as he showed yet again his appreciation for a surface with some give in it to chase down Bivouac over 1200m.

For the past decade, the Coolmore Stud Stakes has been turned into much more than a Group One contest.

Future stallion prospects have hinged on the result and for that reason Exeedance will head to the spelling paddock with bragging rights and his value at stud at least the equal of his contemporaries.

As well as confirming the Hawkes Racing stable as perhaps Australia’s best when it comes to managing the racing careers of potential stallions, Exceedance’s emergence is a triumph for Vinery and its long-serving general manager Peter Orton.

For an Inglis Easter Yearling Sale outlay of $180,000, Orton’s horsemanship and skilled eye has provided Vinery and a group of well-connected clients with the latest breeding windfall in Australian racing.

“At Easter he was just a lovely horse,” Orton said.

“There were a few things about him that put some people off but we looked at him and we loved him.

“We probably love him even more after this.’’

The Coolmore Stud Stakes has always been a race for elite three-year-olds but its recognition as a Group One that extends its influence beyond the racetrack started with Northern Meteor in 2008.

A cavalcade of young sires have had their careers defined by Coolmore success since then but remarkably the race had been elusive for trainer John Hawkes and his sons Michael and Wayne.

“Many good horses springboard off this race and I think that’s a great mark of a stallion-making race,” Orton said.

Exceedance will become the latest in a growing list of Hawkes Racing colts to find a home at Vinery.

The connection between stud and stallion has given the breeding industry All Too Hard, another Exceed And Excel colt in the Silver Slipper winner Headwater and more recently the 2016 Coolmore Stud Stakes placegetter Star Turn.

Just when Exceedance joins the Vinery roster remains to be seen.

Part-owner Rupert Legh, who shared a magnificent journey with the Hawkes team via the deeds of Chautauqua, would like his latest star to enhance his reputation even further,

“He is worth a lot of money. Will we get to see him race longer?

“You’d want to see these horses go on… they have so much to offer the industry.

“They make their value greater. Who knows, you may see him at (Royal) Ascot.”